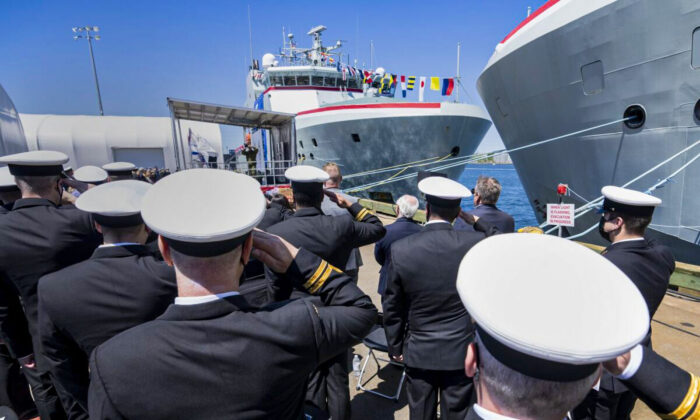 Members of the Royal Canadian Navy salute at a naming ceremony for HMCS Margaret Brooke and HMCS Max Bernays, Arctic and offshore patrol ships at Halifax Shipyards in Halifax on May 29, 2022. (The Canadian Press/Andrew Vaughan)
Canada

Two of Canada’s new Arctic and offshore patrol ships were formally named on Sunday in a move intended to preserve the stories of two of the country’s naval heroes during the Second World War.

Bottles of Nova Scotian wine were broken over the bows of the HMCS Margaret Brooke and HMCS Max Bernays during a ceremony on the Halifax waterfront, acknowledging their construction at the Halifax Shipyard.

“These have been built by Nova Scotians for Canadians,” Nova Scotia Premier Tim Houston told the crowd.

The ritual of naming a ship dates back centuries and is believed to bring good luck and safe travel to the vessel and its crew.

Both ships are part of a fleet of six Arctic and offshore patrol ships, referred to as AOPS, being delivered to the Royal Canadian Navy under the National Shipbuilding Strategy. The ice-capable ships are more than 100 metres long.

Kevin Mooney, president of Halifax Shipbuilding, said despite the challenges posed by the COVID-19 pandemic and global supply chain problems, crews at the Irving-owned yard have both persevered and improved.

“We delivered Margaret Brooke last July with 37 percent fewer production hours than the first AOPS, Harry DeWolf,” he said. “We will deliver a new AOPS each year to the Canadian Navy until 2025, and then two more to the Coast Guard in the following years.”

Filomena Tassi, federal minister of Public Services and Procurement, said she was impressed by her tour of the shipyard.

“I’m in awe when I come down and stand before these ships and think that they are made by Canadian hands. The innovation, the dedication, the commitment to deliver this. It is truly awesome,” she said.

Margaret Brooke enrolled as a nursing sister dietician in 1942 and rose to the rank of lieutenant-commander during her 20-year naval career.

In October 1942 off the coast of Newfoundland, the ferry SS Caribou was sunk by a German submarine, and while fighting for her own survival, Brooke did everything possible to save the life of a colleague and friend.

Both women clung to ropes on a capsized lifeboat.

Despite Brooke’s heroic efforts, her friend succumbed to the frigid water.

Lt.-Cmdr Brooke was named a Member of the Order of the British Empire.

Max Bernays was an acting chief petty officer in August 1942 and was the coxswain aboard HMCS Assiniboine.

During a fierce battle with a German submarine, the Assiniboine maneuvered in and out of fog attempting to ram and sink the enemy vessel.

Both vessels were firing high explosive shells at close range, resulting in a fire that engulfed the ship’s bridge and wheelhouse.

Bernays ordered two junior sailors to get clear, leaving him alone at the helm and trapped by the blaze.

Despite machine-gun and cannon fire, smoke and flames, Bernays executed the helm orders and dispatched over 130 telegraph orders to the engine room.

Bernays was able to ram the submarine and sink it.

He was awarded the distinguished Conspicuous Gallantry Medal by the British Admiralty, making him just one of two members of the Royal Canadian Navy to receive the honour during the Second World War.

The HMCS Margaret Brooke was delivered to the navy last summer, while the HMCS Max Bernays will be delivered this fall.