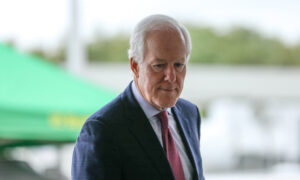 No Quid Pro Quo in Trump's Actions, 'Even If There Was' It Wouldn't Be Impeachable: Senator
0
Share Now
TelegramFacebookTweetEmailTellMeWeReddit
Copy Link 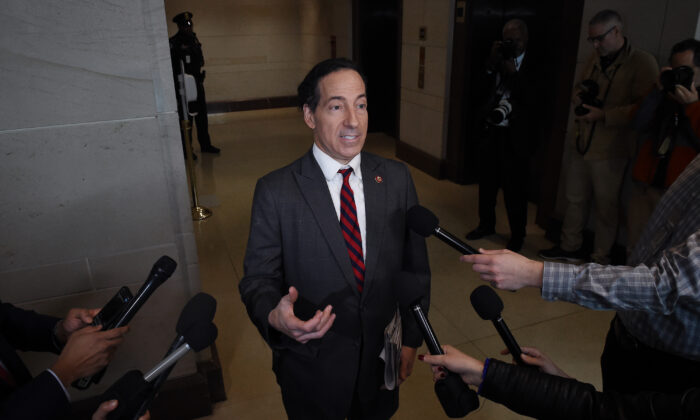 Rep. Jamie Raskin (D-Md.) speaks with reporters after witnesses failed to arrive for testimony before the House Intelligence, Foreign Affairs, and Oversight committees at the U.S. Capitol in Washington on Nov. 5, 2019. (Olivier Douliery/AFP via Getty Images)
Politics

Two more White House officials hadn’t appeared to testify to the House in the impeachment inquiry against President Donald Trump as of 10 a.m. Tuesday, and lawmakers weren’t expecting them to appear later in the day.

Wells Griffith, a special assistant to Trump and senior director for international energy and environment for the National Security Council, was also scheduled to be deposed on Tuesday but hadn’t shown up.

Rep. Jamie Raskin (D-Md.), a member of the House Judiciary and House Oversight committees, told reporters just before 10 a.m. that neither Griffith nor Duffey had appeared and were unlikely to do so.

Three other officials are slated to testify on Wednesday. They are Vought and two State Department personnel: T. Ulrich Brechbuhl, counselor of the department, and David Hale, under secretary of state for political affairs.

Blair’s attorney cited the order by Trump’s White House to cite executive privilege while Eisenberg’s counsel told House Democrats in a letter that “the President has instructed Mr. Eisenberg not to appear at the deposition.”

A former White House aide, Charles Kupperman, also didn’t appear for a scheduled interview in October and has asked a federal judge to rule whether he should obey Trump’s direction or comply with House Democrat efforts.

The White House has called the impeachment inquiry illegitimate while instructing officials not to comply with requests for depositions, including subpoenas. House Democrats have said the inquiry is necessary because Trump appeared to abuse his office during a phone call with Ukrainian President Volodymyr Zelensky in July.

An anonymous person filed a complaint accusing Trump of the abuse, triggering the inquiry and prompting the White House to release a transcript of the call.

Among Trump’s alleged offenses is his request to Zelensky to “look into” former Vice President Joe Biden and Biden’s son, Hunter Biden. Biden in 2016 told then-Ukrainian President Petro Poroshenko that his country wouldn’t get $1 billion in aid unless Viktor Shokin, a prosecutor, was ousted.

Shokin, who said he resigned due to pressure from Poroshenko, who cited Biden, was probing the energy company Burisma, where Hunter Biden worked from 2014 to 2019.

Both Bidens have denied wrongdoing. Zelensky’s new top prosecutor said in October that his office is reviewing cases that were closed, including the one looking at Burisma.