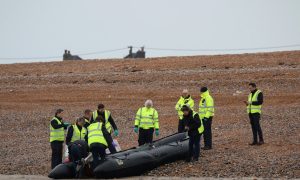 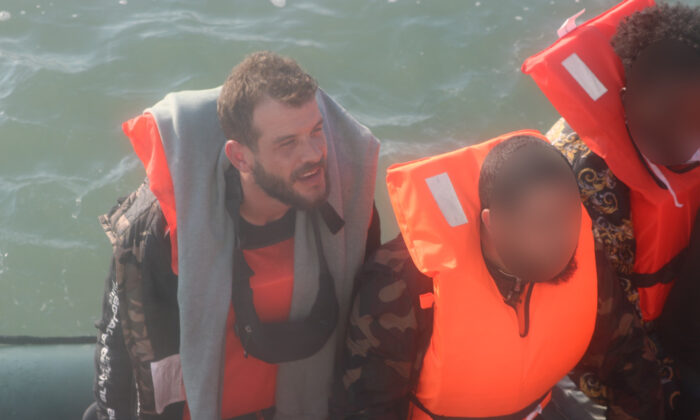 Thirty-year-old Iraqi national Assad Abdul Latif Sayed Abdulghany jailed Oct. 30 for steering a boat across the English Channel, smuggling himself and 16 others on Sept. 15, 2020. (Courtesy of the Home Office)
UK

Two more human smugglers were jailed on Friday, each for steering a boat of migrants across the English Channel from France.

Border Force footage had “clearly showed” that they had each steered a rigid-hulled inflatable boat (RHIB) of migrants across the Channel,” the Home Office said in an emailed statement.

Abdulghany arrived in the UK after smuggling himself and 16 other people, six of them children, while the boat with Azarkish at the helm had seven others in it, the Home Office said.

Both boats were intercepted at sea on Sept.15.

At earlier hearings both Abdulghany and Azarkish had admitted charges of assisting unlawful immigration into Britain, the Home Office said.

When interviewed following arrest, it said, Abdulghany claimed he had paid £4,000 for the crossing while Azarkish said he’d been quoted a figure of £2,240.

Azarkish, however, said he’d been told that if he steered the RHIB he would be able to cross free of charge.

The Home Office highlighted that in late October two Iranian men were sentenced to two years in prison on illegal immigration charges.

Legal action against human smugglers has been taking place on both sides of the Channel.

Last week a 37-year-old Iranian man, one of the 22 people rescued from the migrant boat that sank off the French coast was indicted on manslaughter charges.

The Dunkirk prosecutor said that the man had been identified by other passengers as being at the helm of the semi-inflatable, which capsized on Oct. 27 off the French coast.

The deaths of four people, including two children, who drowned attempting to cross the English Channel last week, highlight the need to tackle the illegal migration according to senior UK government leaders.

“The tragedy in the Channel last week is a stark reminder of the dangers of illegal migration,” said Home Secretary Priti Patel.

“Anyone who facilitates these crossings is putting people’s lives at risk,” she said.

“It is a crime and we will go after the people involved,” she added.

‘Preventing any Further Loss of Life’

“The tragic events of last week reinforces how critical it is to end the viability of the small boat route. Preventing any further loss of life is my priority” he said.

“Last week we saw four more reckless offenders put behind bars and we continue to hunt down the criminals who are risking migrants’ lives,” he added.

Meanwhile campaigning organizations, including Save the Children, have said that the deaths should be a “wake-up” call for French and British authorities to better protect refugee rights.

It said those making the crossings as refugees were fleeing “conflict, persecution, and poverty” and called for stronger refugee protections.

Up to July this year, according to think tank Migration Watch UK around 7,600 people have so far made the illegal Channel crossing from France to Britain—over six times the number last year.

During the summer this year, with warmer water and calmer seas, on some days hundreds of people were making the 21-mile journey through the busiest shipping lane in the world.

More people made the crossing in September than in the whole of the previous year.

At the end of their sentences, the jailed men will automatically be considered for deportation, the Home Office said.