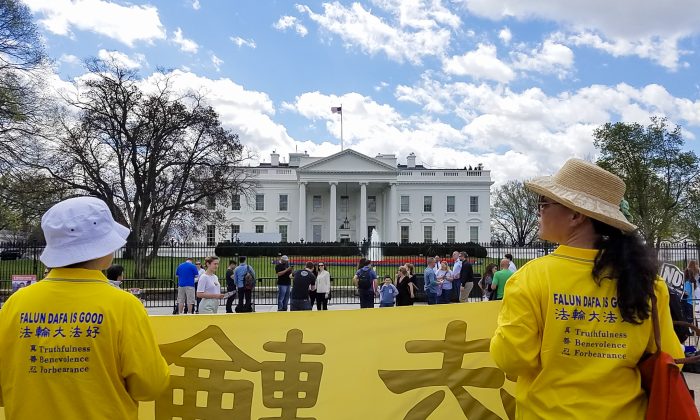 Falun Gong practitioners hold a banner opposite the White House on April 4, 2017. The practitioners gathered to ask President Trump to speak to China's head of state, Xi Jinping, about ending the persecution of Falun Gong. (Bin Xue/NTD)
Thinking About China

WASHINGTON—Ms. Yu Zhenjie traveled from Flushing, New York, to Washington on April 4 to deliver a message to President Donald Trump. Yu did not meet Trump personally. She was one of several dozen practitioners of the Falun Gong spiritual practice who gathered on Pennsylvania Avenue outside the White House in a bid to gain the president’s attention.

On April 6 and 7, Trump meets with Chinese head of state Xi Jinping at Mar-a-Lago, Florida. In preparing for this meeting, Trump would do well to spend a little time hearing Yu’s story.

Yu took up Falun Gong 22 years ago. She felt the discipline’s slow moving, meditative exercises and teachings, based on the principles of truthfulness, compassion, and tolerance, helped her become a better person.

Family members saw changes in her and also began to practice. And just as the practice spread by word of mouth in her family, on her block, and around her town, so, too, it spread throughout China.

Whether the number was 70 million or 100 million, the number of Falun Gong practitioners was larger than the membership of the Chinese Communist Party (CCP). The numbers scared then-Chinese leader Jiang Zemin, as did the attractiveness of Falun Gong’s traditional, moral message to the Chinese people.

Jiang felt this peaceful practice posed a threat to the CCP. On July 20, 1999, he launched a campaign to eradicate Falun Gong, employing mass arrests and a nonstop propaganda blitz to demonize the practice.

Yu had only known good things from Falun Gong, and so in October 1999, she traveled from her home in the far northeastern province of Heilongjiang to Beijing to tell the government it had made a mistake. She was arrested.

Like many other Falun Gong practitioners, Yu wanted to protect her family from reprisals, and so she refused to give her name or tell authorities where she lived. In jail, she was referred to as “No-Name #3.”

She introduced Falun Gong to one of the guards at the prison. He was grateful to her, and the two became friendly. One day, he came and spoke to her with a serious demeanor. He said those prisoners who had not given their names would be given a medical examination the next day. They would then be sent to a place from which they would never return. It would be a disaster for them, he said.

Something about the guard’s manner swayed Yu, and she gave him her name. At that time, the atrocity of forced, live organ harvesting from prisoners of conscience was unknown. Yu’s account, though, is consistent with many other eyewitness accounts that said practitioners who did not give their names disappeared. There have also been widespread accounts of unexplained medical exams being given to those who otherwise were subjected to constant abuse and torture.

Investigators believe hundreds of thousands of Falun Gong practitioners have been murdered by having their organs carved out of them for use in China’s booming transplant industry.

Yu was shipped back to Heilongjiang Province and sentenced to three years in a labor camp.

She said she was tortured a lot in an effort to “transform” her—to force her to give up her faith in Falun Gong.

On one occasion, a female captain of the guards was using a large electric shock club on Yu. The captain felt she was not getting the effect she wanted. She said she would try a technique she had been taught at police school called “making popcorn.”

The captain pushed the club hard against Yu’s face, twisted it, and then shocked her. Yu said the pain was incredible. The other guards begged the captain to stop. Yu was just a meditator, they said. She could not stand the pain, they said. The captain would disfigure her, they said. Eventually, the captain stopped.

At the end of her three-year sentence, Yu could no longer walk and had to be carried out of the labor camp. She credits doing the Falun Gong exercises with her recovery from her injuries.

Yu was arrested twice more. The second time, she was strapped to a hospital bed and injected with unknown drugs. She said she felt incredible pain in her abdomen and lower back.

Her body swelled and her skin became black. She lost her memory. She was close to death.

Her younger brother heard about her condition, and on New Year’s Eve 2006, he managed to get her out of the hospital. Falun Gong practitioners cared for her and, again, she started to recover.

Hearing that the police were searching for her yet again, Yu fled to Thailand, and in 2009 made it to the United States.

Because Yu practiced Falun Gong, her daughter was expelled from her university. Her husband, under pressure from the authorities, divorced her.

Her father, unable to bear the disaster that had befallen his family, died from grief, Yu said.

Yu’s story is, unfortunately, not unusual.

At the time Yu was being persecuted, the Congressional-Executive Commission on China reported in 2008 that hundreds of thousands of practitioners had likely been detained, while the U.S. State Department in 2009 reported foreign observers saying that half of those in China’s huge labor camps system were Falun Gong practitioners. In 2000, the U.N.’s special rapporteur on torture reported that two-thirds of torture cases in China involved Falun Gong practitioners.

A Freedom House report release in February documents that the persecution is continuing.

Yu and the other practitioners who gathered opposite the White House have two messages for President Trump.

They want him to tell Xi Jinping to stop the persecution of Falun Gong and to bring Jiang Zemin to justice for his crimes against humanity.

Trump may find Xi receptive. Xi inherited the persecution, which has been kept going by the faction loyal to Jiang.

Xi has taken several steps that appear to be unwinding it. His anti-corruption campaign has arrested and purged most of the high-ranking officials who bear the greatest responsibility for the persecution.

Xi has closed the labor camps, which were a prime means used for persecuting Falun Gong practitioners, and he has allowed the court system to accept some 200,000 complaints suing Jiang Zemin.

If Trump speaks publicly and privately about the persecution, this can help Xi by strengthening his hand as he continues to battle the Jiang faction’s influence, while at the same time serving U.S. interests.

Sen. Marco Rubio (R-Fla.), in a statement on the occasion of Xi’s visit, said, “No nation that flouts the rule of law at home and disregards the basic rights and inherent dignity of its own citizens can be trusted to be a responsible stakeholder on economic and security issues.”

Rep. Chris Smith (R-N.J.) in a statement called for “a serious, candid, and robust exchange” with Xi on human rights and said, “The president should not make the mistake of his predecessor and believe that silence on human rights will get concessions from the Chinese government in other areas.”

In response to a question about whether Trump would discuss religious persecution with Xi, a senior White House official did not want to anticipate what the president would say, but remarked that “human rights are integral to who we are as Americans.”

Yu is very grateful for the rights she enjoys here in the United States and, with a smile, said she believes Trump will do the right thing.