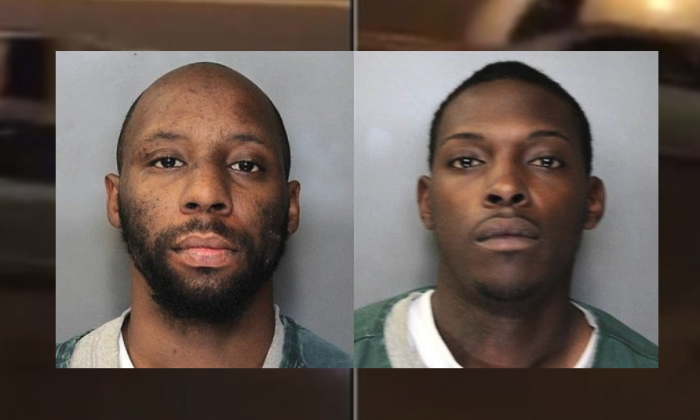 Andrew Thomas (L) and Keenan G. McGriff have been arrested by Syracuse police and accused of recklessly causing the death of Earnest Collins on Aug. 26, 2017. (Syracuse Police Department)
Crime and Incidents

Two Syracuse men have been charged with manslaughter for their role in a bizarre incident. A man was beaten by three assailants and left lying in a road, then he was struck and killed by a passing car.

Andrew Thomas, 22, and Keenan G. McGriff, 25, have been charged with second-degree manslaughter, reported syracuse.com. If convicted on this felony charge, they face a minimum sentence of 1 to 3 years in prison and a maximum sentence of 5 to 15 years.

Thomas and McGriff are accused of recklessly causing the death of Earnest D. Collins in the early morning hours of Aug. 26, 2017, police said, reported syracuse.com

Collins was first beaten by three men and as he was lying in the road in the 300 block of North Salina Street, Syracuse, New York, he was struck by a passing car, video surveillance reportedly showed. The driver did not spot Collins in time to avoid him, police said, and was not charged for his role in the incident.

“There was evidence indicating that their actions were determined to be a factor in the death of Earnest Collins, and as a result, indictment warrants were issued for their arrest. We do know that they were in the area prior to Mr. Collins being struck by the car,” said Syracuse Police Department spokesperson Sgt. Richard Helterline.

The three men walk away, leaving the victim lying on the road in the northbound lane. The video shows two cars in the southbound lane approaching and slowing down, while one driver can be heard trying to alert oncoming northbound traffic by honking his horn. A northbound car apparently fails to notice the warning and runs over the victim.

Collins, who was conscious after being run over, was transported to a hospital in Syracuse and pronounced dead sometime later.

Warrants for the arrest of Thomas and McGriff were issued following a Syracuse Police Department investigation.

“After a thorough investigation was completed, and after coordinating with the Onondaga County District Attorney’s Office, warrants were issued for suspects that are believed to have been involved in the death of Earnest Collins,” a police statement said.

“This investigation is continuing,” the statement said, “and additional arrests are possible.”

Syracuse police are urging anyone with information about the incident to come forward.

Please join all those who support independent journalism and share this article far and wide!