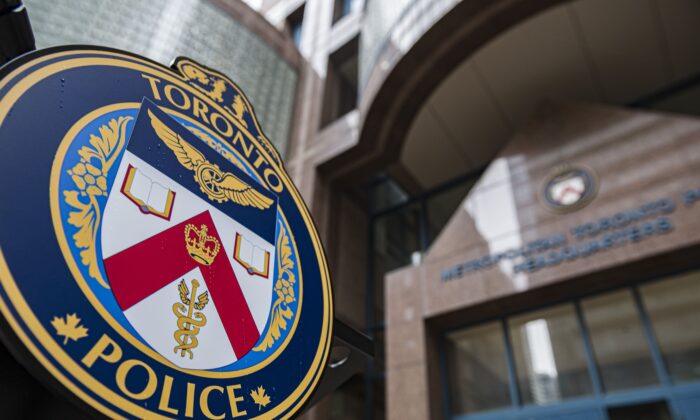 The Toronto Police Services emblem is photographed during a press conference at TPS headquarters in Toronto on May 17, 2022. (The Canadian Press/Christopher Katsarov)
Canada

Two men were seriously injured after being shot outside a Toronto mall Saturday evening.

According to the Toronto police, officers were called to Fairview Mall in North York following reports of a shooting in a parking lot outside the LCBO and Shoppers Drug Mart just after 6:30 p.m.

Officers found two men suffering from gunshot wounds upon arrival. Toronto medics were also on the scene to assess the men’s condition. The two were subsequently rushed to hospital with serious but non-life-threatening injuries.

Speaking to reporters at the scene on the evening of June 9, police said they do not believe the incident was a random shooting, but resulted from an altercation involving three people who knew each other, according to CP24.

“It appears that some suspects were involved in an altercation behind me here in the parking lot which transpired for unknown reasons. However, what we do know at this time is we believe that the suspect and victims are known to each other, and for that reason we do not believe there is any threat to the public,” said duty officer Kirsty Smith.

CP24 reported that one of the men suffered gunshot wounds to his abdomen while the second was shot multiple times, but noted the police hadn’t confirmed that.

Police said the third person involved in the altercation has been identified as a suspect. However, that individual remains outstanding.

The police said an ongoing investigation is taking place and anyone with information can contact them.