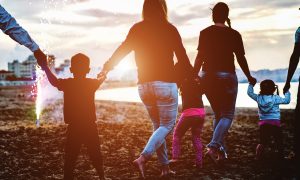 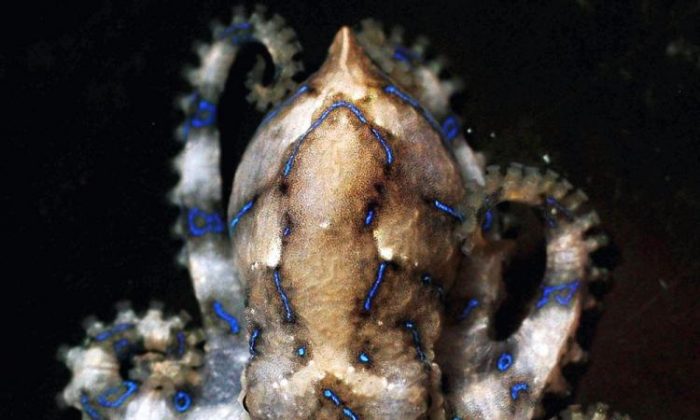 The blue-ringed octopus has a powerful venom that is a neuromuscular paralyzing toxin. Its bite can cause paralysis and then death if no medical treatment is sought. (Ian Waldie/Getty Images)
Asia & Pacific

Two backpackers risked their lives playing with a venomous blue-ringed octopus in Australia, according to reports on July 13.

Ross Saunders, from the United Kingdom, posted the video from Australia after spending the day in the water, the Daily Mail reported.

“Been an interesting two-day introduction to fishing,” he said. “Watched two amazing sunsets, saw dolphins and caught a blue-ringed octopus, one of the most dangerous animals in the world and didn’t even realize!”

According to The West Australian, the octopus has enough venom to kill 26 people with a single bite.

Saunders and the other person in the video are seen placing the octopus on his skin several times.

“You could’ve died. Have no common sense about the dangerous animals, creatures, and mammals Australia has,” one wrote.

“Can’t believe he put that on his arm … if it bites you, it paralysis [sic] you and you stop breathing within minutes,” added another.

John Paul Lennon, the cameraman, said he didn’t know how dangerous the animal was.

“He’s been trying to get pictures of all animals … koalas … all that kind of stuff and he wanted a picture with the octopus on his arm,” he said. “I didn’t know at the time was it dangerous and everybody told me ‘no’ so I thought it would’ve been all right to get a photo.”

Tabloids in the United Kingdom quickly reposted the video.

Saunders responded, saying, “We made the news,” according to The West Australian.

He also wrote on Facebook: “We got home thinking not much really happened until we showed the octopus video to some of our friends and that’s when we found out what it was and a lot of googling was done! We laughed about it when we first found out but it did eventually sink in and it’s surreal to think back knowing if things had been slightly different it could have been fatal and things would be very different right now. Thankfully no one was hurt and we can laugh about how close to death and stupid we were. Lesson learnt, don’t [expletive] with the wildlife in Australia.”

In another incident, a tourist this year filmed himself picking up a deadly blue-ringed octopus with his bare hands. Australian locals also said it was a bad idea.

According to News.com.au, the video had Chinese text accompanying it.

“Such a beautiful octopus,” it said in Chinese.

The blue-ringed octopus is one of the deadliest animals. Its venom can kill a person within minutes.

The Ocean Conservancy says the octopus’s “psychedelic coloring and pint-sized packaging make it seem more adorable than alarming. But don’t let its cuddly exterior fool you: this tiny octopus can kill you. And quickly.”

The mollusk is native to the Pacific Ocean and is found in shallow tide pools and coral reefs.

“When not seeking food or a mate, blue-ringed octopuses often hide in crevices, shells or marine debris. If you catch them outside of their cozy hiding spots, it’s easy to see how the animal gets its name: when threatened, bright blue rings appear all over its body as a warning signal to potential predators,” it says.

The venom is about 1,000 times more potent than cyanide and can kill 26 people in minutes, the website says.