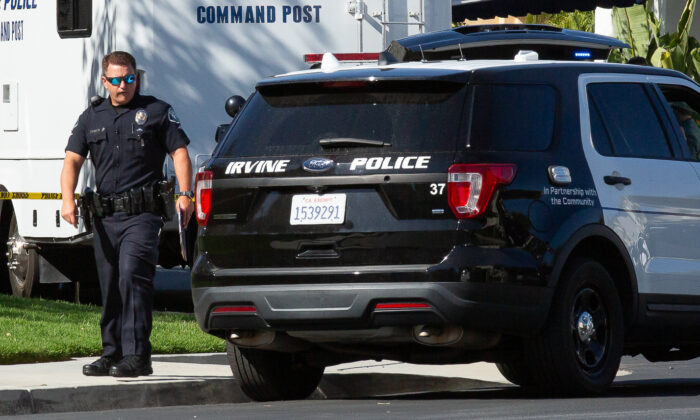 IRVINE, Calif.—Two men suspected of trying to burglarize a home in the gated neighborhood of Shady Canyon in Irvine were in custody on May 24.

An Irvine Police Department officer located a suspicious vehicle parked in the neighborhood of Quail Hill at 11 p.m. on Saturday and noticed a two-way radio and a loaded ghost gun inside the vehicle, Lt. Bill Bingham said.

Shortly after, a homeowner on Canyon Creek reported two men wearing masks approached their home but fled when the resident yelled into their surveillance system, Bingham said.

Officers established a perimeter in an effort to apprehend the suspects and with the assistance of the Anaheim Police Department’s helicopter Angel and the Irvine Police Department drone team, the two men were located and arrested in the surrounding open space.

Dione Eric Riley, 27, of Long Beach, and Jordan Jahri Jones, 25, of Palmdale, were arrested for suspicion of attempted residential burglary and booked at the Orange County Jail.

Detectives are investigating whether the suspects have any connection to a May 1 residential burglary in Shady Canyon, Bingham said.

Anyone with information related to these crimes should contact Det. Eric Weber at eweber@cityofirvine.org or 949-724-7245.