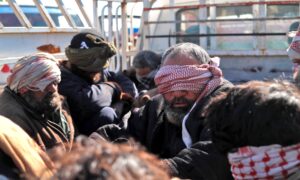 Two men have been arrested on accusations of plotting a terrorist attack in New York City, including the Trump Tower in Manhattan, according to officials.

Kristopher Sean Matthews, of Elgin, South Carolina, had the alias “Ali Jibreel,” and officials said he was conspiring with other ISIS terrorist supporters over a period of months, including Texas man Jaylyn Christopher Molina.

The U.S. District Court for the Western District of Texas in San Antonio said Matthews and Molina are both accused of “conspiring to provide material support or resources to a designated foreign terrorist organization,” reported The State.  The charges carry a potential 20-year prison term. Molina referred to himself as “Abdur Rahim,” officials said.

The FBI used online covert employees and confidential sources to find Molina and Matthews, officials said in an affidavit. An FBI investigator said there were conversations between Matthew and Molina as well as others in a secret chat group, where they professed loyalty to ISIS and their hate for the United States.

“We need to stick together, we need to defeat them, we need to take a lot of casualties,” Molina allegedly said as the two men discussed plans to kill in a terrorist attack. Matthews said it would be better to attack government buildings instead of areas “like malls where innocent children are,” according to the officials.

At one point, Molina wrote: “You are my enemy (America) and never will I wear your flag … but I will raise the black flag of Allah,” as reported by News4, citing charging documents.

They wanted to attack places such as the Trump Tower, the New York Stock Exchange, and other places.

The two also described gaining some kind of notoriety if they pulled off the attack. It would make them “rock star status baby,” Matthews said. “This could be Netflix worthy.”

The affidavit also claims that the two wanted to go to Syria and join ISIS. Meanwhile, Molina as recently as mid-August was in contact with a woman in Europe about manufacturing explosives.

Molina is also accused of posting manuals on how to train with an AK-47 rifle and bomb-making instructions from al-Qaeda’s “Inspire” magazine, documents said.

The arrests come days after the Trump administration announced it sent mechanized infantry and other assets into Syria to increase support for coalition forces fighting ISIS in the region.

President Donald Trump has said that he ultimately plans on withdrawing troops from the Middle East.