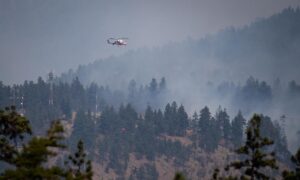 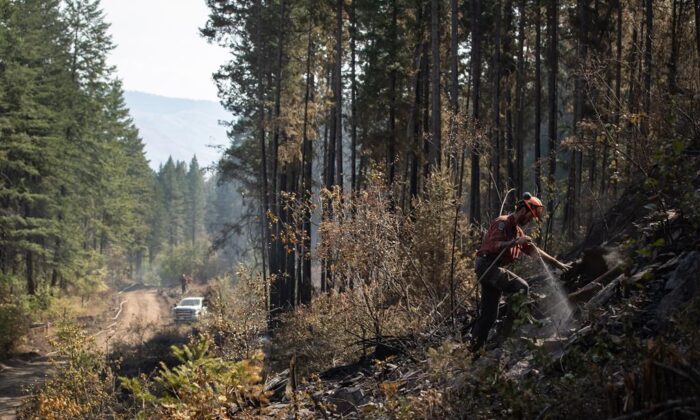 VANCOUVER—Two of the largest wildfires in British Columbia are now classified as “being held” after weeks of burning out of control and forcing people out of their homes.

The BC Wildfire Service said Thursday the nearly 900-square-kilometre Sparks Lake fire burning north of Kamloops is contained, meaning suppression has been sufficient to ensure it is not likely to spread beyond its current boundaries under forecasted conditions.

The 635-square-kilometre Tremont Creek blaze burning just outside Ashcroft is also being held and the service said structure protection resources are being removed in areas that are no longer at risk.

“We’ve had 11 (new) fires to date in the last two days, all of which were relatively small.”

Environment Canada forecasts cooler temperatures with cloudy conditions or light rain across most of the province.

But Nessman said that some of the wildfires of note such as the White Rock Lake blaze still present challenges.

Crews are working to smother “deep-burning fuels” persistent throughout the eastern flank of the destructive fire, which is still classified as burning out of control west of Okanagan Lake, Nessman said.

A firefighter was injured after he fell down a hill while fighting the flames, he said.

“All indications are he’s not as serious as initially we were concerned, but he is getting evaluated by a professional medical staff.”

There have been “a number of injuries” this year, Nessman said, although they haven’t been serious.

“The hazards are out there,” he said.

“We’ve been very fortunate. We have had close calls, but we haven’t had any of those what I would categorize, you know, significant life−altering injuries with our staff. We have had quite a few of the smaller varieties.”

The service said wind fanned the eight-square-kilometre fire burning near West Kelowna late Wednesday and it remains classified as out of control.

There are more than 3,400 firefighters from B.C. and another 400-plus from out-of-province helping to fight the fires.

Australian firefighters in B.C. will return home this weekend as the fires calm down, Nessman said. Some of the firefighters from the Northwest Territories will go back next week, he added.

There are about 240 active wildfires in B.C., with 22 considered fires of note, meaning they are either highly visible or pose a potential threat to public safety.

The province still has about 45 evacuation orders and 90 evacuation alerts in place.

Nessman said the province has spent about $400 million on fighting fires this year.

In 2017, the province spent $649 million to fight record wildfires. The following year, $615 million was spent when another record for area burned was set.

“We’re not into the record territory.”