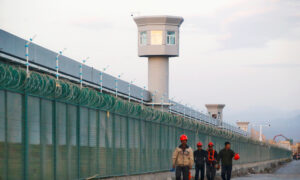 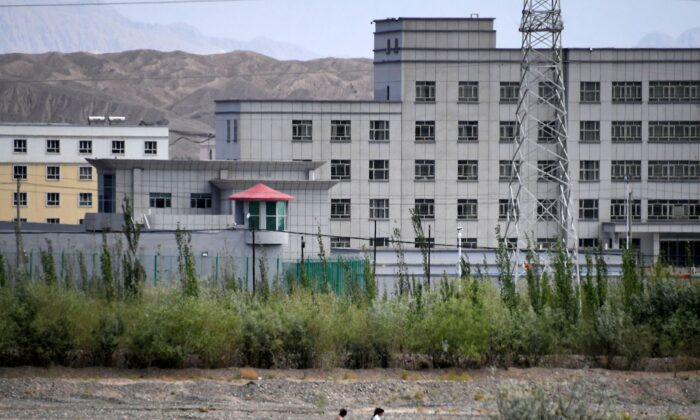 A facility believed to be a so-called re-education camp where mostly Muslim ethnic minorities are detained, north of Kashgar in China's Xinjiang region, on June 2, 2019. (Greg Baker/AFP via Getty Images)
Thinking About China

2 Major Impacts of EU Sanctions on the Chinese Regime

On March 22, the European Union announced that it would impose sanctions on Chinese officials, including one entity, over Beijing’s serious human rights violations in Xinjiang. The sanctions were the first significant measures since the EU arms embargo was imposed on China after the 1989 Tiananmen Square Massacre.

Four senior officials and one entity, the Public Security Bureau of Xinjiang Production and Construction Corps, were imposed a travel ban and an asset freeze.

The CCP immediately retaliated by imposing sanctions on eight ambassadors in the EU (including five members of the European Parliament, one Dutch Parliament member, one Belgian Federal Parliament member, and one member of the Seimas of the Republic of Lithuania); two scholars (German scholar Adrian Zenz, Swedish scholar Björn Jerdén); and four entities (the Political and Security Committee of the Council of the European Union, the Subcommittee on Human Rights of the European Parliament, the Mercator Institute for China Studies in Germany, and the Alliance of Democracies Foundation in Denmark).

The CCP’s intention is to hit back twice as hard and to suppress the EU in its momentum—this is also one of the manifestations of Beijing’s “wolf warrior” diplomacy.

However, once a sanctions war starts, it is no longer under the control of the CCP.

Successive measures by the EU and member states have been followed. On the same day the sanctions were announced, the European Parliament said that it would temporarily cancel the review of the China-EU Comprehensive Investment Agreement, which was signed 0n Dec. 30 last year after 7 years and 35 rounds of arduous negotiations. On March 24, eight EU countries—the Netherlands, Belgium, Denmark, France, Germany, Lithuania, Sweden, and Italy—have called in or will soon summon the Chinese envoys in response to the CCP’s retaliatory moves.

But one person was left out: Chen Quanguo, the top leader of Xinjiang and one of the 25 members of the Politburo (China’s top decision-making body).

The CCP’s aggressive retaliatory sanctions only add fuel to the fire, forcing the EU and member states to take bold steps in countering the measures.

Judging from the current situation, the escalated sanctions war will be more than just a battle. It will have a major impact on the overall international strategic landscape.

First, the EU may make major adjustments to its China strategy.

According to a report issued by the European Commission in March 2019, while acknowledging the CCP as a “cooperation partner,” the Commission also recognized the CCP as a “negotiating partner,” “an economic competitor,” and “a systemic rival.” The inherent contradiction in the definition shows the serious appeasement policy of the EU.

However, a series of major incidents that have occurred since 2019, including Hong Kong’s anti-extradition bill protests, the CCP’s mishandling of the COVID-19 pandemic, the new cold war between China and the United States, and the CCP’s “wolf warrior” diplomacy, have forced the EU to reflect upon its China policy.

After two years of deliberation, the EU, with its 27 member states, has finally taken a difficult step towards changing its China policy such as sanctioning human rights violators and institutions in Xinjiang.

Adrian Zenz, a German scholar who was sanctioned by the CCP, tweeted: “For the EU, this still fairly small step is nevertheless a departure from its usual near-complete kow-towing.”

So, how will the EU’s China policy change in the future?

On March 10, the EPP Group, the largest political group in the European Parliament, adopted the first strategy report on EU-China bilateral relations, titled, “EU-China Relations—Towards a Fair and Reciprocal Partnership.”

The document stated, “Given the political consequences of the COVID-19 pandemic and the imposition of the so-called Security Law for Hong Kong, a more aggressive pursuance of long-term goals towards Xinjiang, Tibet and Taiwan, disregard for the multilateral system and international agreements, spread of Chinese malign influence, failure to live up to fundamental human rights obligations, we believe this fourfold approach to be outdated.”

“Systemic rivalry can increasingly be seen as the overriding paradigm in our relationship,” the report said.

The report suggests that EU-China relations may develop according to three different scenarios:

Obviously, how the EU responds to this EU-China sanctions war will directly affect the future of Europe and China.

Second, based on common values of humanity, the international alliance to contain the CCP has become more prominent.

Regarding the CCP’s counter-sanctions, EU foreign policy chief Josep Borrell said at the press conference on March 22: “Rather than change its policies and address our legitimate concerns, China has again turned a blind eye. These measures are regrettable and unacceptable.” He also stated, “There will be no change in European Union determination to defend human rights and to respond to serious violations and abuses.” Borrell described the coordination between the EU, Britain, Canada and the United States as “perfect.”

In addition, the foreign ministers of Australia and New Zealand issued a joint statement expressing “serious concerns” about “more reports showing that the human rights of Xinjiang Uyghurs and other Muslim minorities have been severely violated” and welcomed the sanctions announced overnight by Canada, the EU, the UK, and the United States.

It can be seen that the EU’s sanctions against the CCP this time initiated the chain reactions of the international community to hold the CCP accountable for its human rights abuses.

In particular, it must be pointed out that the EU-China sanctions war has suspended the China-EU Comprehensive Investment Agreement. As we all know, the CCP excels in manipulating the economic issues to promote its political agenda and to influence the policies of various countries toward benefitting China.

The EU is the key target of the CCP’s economic united front. For example, China became the EU’s largest trading partner in 2020, with the bilateral trade volume reaching $649.5 billion which bucked the market trend during the pandemic. For the first time, China replaced the United States as the EU’s largest trading partner. At the same time, the EU reached an investment agreement with the CCP despite U.S. opposition.

However, this time the EU imposed sanctions on the CCP. This shows that the CCP’s economic united front is a major failure, and the EU is able to counter the CCP economically.

Due to various reasons, the EU has been deceiving itself for a long time and has been forced to withstand a certain degree of economic coercion from the CCP. Now, the EU has realized that if trade can be weaponized, the EU is more capable than the CCP.

In this way, the offensive and defensive trends have changed, and the China-EU Comprehensive Investment Agreement has turned into a deterrent weapon for the EU, and the CCP has become quite passive.

In short, the CCP has failed this time in its economic united front and coercion against the EU. This is very helpful for the international community to recognize the inherent fatal flaws of China’s economy and the CCP’s rogue nature.

This time the CCP has launched a sanctions war, and the loss is not small.