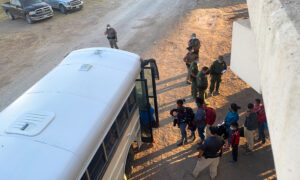 Two law enforcement officers were shot while executing a search warrant in Houston on Monday morning, authorities confirmed. Officials later confirmed that an officer was killed and another was injured.

The Houston Police Department said on Twitter that top officials are responding to reports that two officers were shot at 5350 Aeropark Drive in Houston.

Houston County Sheriff Ed Gonzalez wrote that two officers were injured during a shooting while they attempted to execute a search warrant.

Houston Mayor Sylvester Turner announced one officer died and the other was injured at a news conference on Monday. The injured officer is in stable condition, he said.

William Jeffrey, a longtime officer who joined the department in 1990, was pronounced dead at Memorial Hermann Hospital on Monday, officials told the Houston Chronicle and KHOU-TV.

The other officer was identified as Sgt. Charles Vance, who joined the police force in 1997, according to the paper.

Chief Troy Finner said the officers, members of the Major Offenders fugitive warrant team, knocked on the suspect’s door at around 7:30 a.m. local time. A woman answered before a man appeared and opened fired on the officers, Finner told KHOU-TV.

The suspect, who was not named, died at the scene, Finner said.

Police said that along with the woman, there were also children in the home at the time of the shooting. The woman and children were not injured, officials told KHOU-TV.

“He’s a great man, a great family man,” said Finner of Jeffrey, the officer who died. “Every police officer is special. Every first responder is special. But like his wife said, he is one of the best.”

Finner added: “Most of us know [Jeffrey] personally, I’ve known him my entire career … It’s just as his wife said—what a great man, what a great officer. Wife just retired. Building their dream home with one kid. But you know, right now, I want to celebrate the service of him and all our officers around the nation and in this great city.”