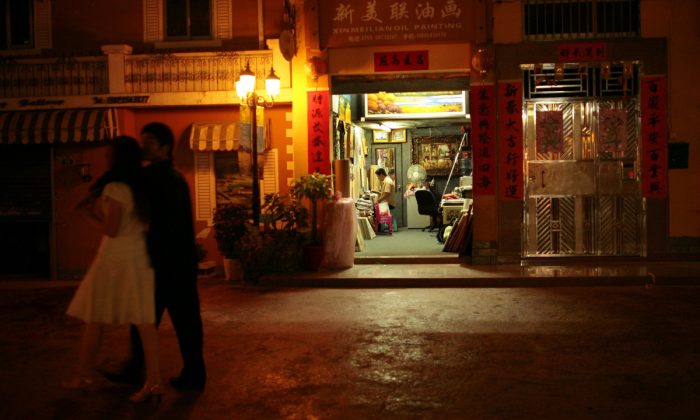 Two Jaywalking Women Launched Into Air by Hit-And-Run Driver; One Dead, One Injured

A man without a drivers license slammed his car into two women jaywalking across a street, killing one and injuring the other. The man attempted to flee from the scene, but was later arrested, according to multiple Chinese online media outlets.

Shocking footage caught by traffic cameras shows the moment of impact, and the women being launched into and spinning through the air, as the driver stopped the car at the last moment.

The two women were crossing the street in the early hours of July 20 in Chaozhou City of the southern Chinese province of Guangdong. Both were hospitalized, and one of the women later passed away. Their names were not disclosed in the reports.

The local police stated that the man, surnamed Lu, 24, had been arrested and admitted to driving without a license, according to the July 24 report from Feng Videos.

Footage of the incident began just after 2:30 a.m. on a busy street.

Traffic laws are only casually acknowledged in China. About 30 seconds before the incident, two women can be seen leaning against the railing median in the street, safely jaywalking on the other side of the road, and walking into a parking lot. Just after that, two males on a moped can be seen riding the wrong way down the divided road.

Then a woman in white and a woman in yellow begin walking into the street. While traffic is approaching, the two women walk into the oncoming flow of vehicles without hesitation—another common practice in China.

While the mopeds and one car pass the women at a leisurely pace, another car comes through the distant traffic light, accelerating all the way. Right as the two women cross into the last lane of traffic, neither the driver nor the two women seem to notice each other.

As the driver slams on the brakes, white smoke exudes from the wheels. But it’s too late. The impact is so strong that it immediately flips the women upside down and into the air. The video shows the woman in yellow’s head hitting the windshield, causing a large crack in the glass.

As if the crash wasn’t bad enough, the two fly through the air as the red car comes to a halt.

The woman in white was flipped over two times before landing on the asphalt. The two land outside of the camera’s view. However, the sound was likely loud enough causing people, including the two women who walked off camera one minute earlier, to come running to the scene. Several people can be seen kneeling near the women.

Both women were hospitalized, while one of them later died from sustained injuries.

Lu reportedly fled the scene in fear, leaving his car behind. He was caught two days later on the morning of July 22. He confessed to driving without a license as well as committing a hit-and-run, according to Feng Videos.