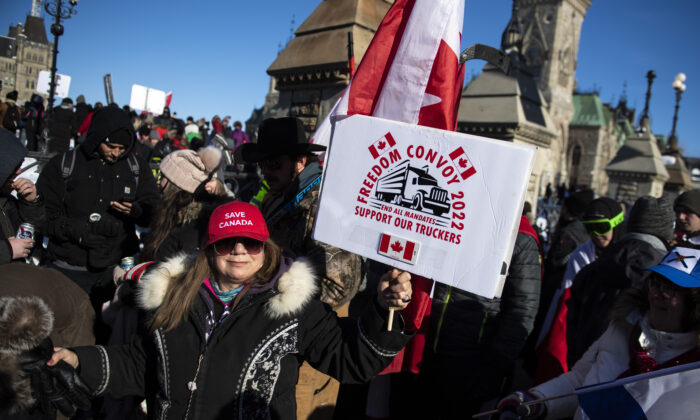 A woman takes part in the "Freedom Convoy" protest against COVID-19 restrictions, on Parliament Hill in Ottawa on Jan. 29, 2022. (The Canadian Press/Justin Tang)
Canada

More than 40 percent of Canadians believe that the prime minister and provincial premiers share the blame for the ongoing truckers’ protest in Ottawa because of their “condescending attitude” toward Canadians who oppose the federal COVID-19 mandates and restrictions, a new survey shows.

The online survey, conducted by Leger between Feb. 4 and Feb. 6, surveyed 1,546 Canadians on their perspectives regarding the “Freedom Convoy” protest taking place at the nation’s capital since late January.

The Freedom Convoy initially began as a protest against the federal government’s COVID-19 vaccine mandate for cross-border truckers. The demonstration soon expanded to a national movement, with those opposing pandemic-related mandates and restrictions joining the protests.

The Leger poll found 44 percent of all respondents who have been vaccinated against COVID-19 say they “sympathize with the concerns and frustrations being voiced by people involved in the trucker protest in Ottawa.”

Prime Minister Justin Trudeau has refused to meet with the demonstrators, saying  the protests “have expressed hateful rhetoric, violence towards fellow citizens, and a disrespect not just of science, but of the front-line health workers.”

Trudeau has also disparaged the participants of the Freedom Convoy, describing them as a “fringe minority,” “racist,” and extremist in nature. He has also used similar words to describe Canadians who choose to remain unvaccinated for COVID-19.

“They are extremists who don’t believe in science. They’re often misogynists, also often racists. It’s a small group that muscles in, and we have to make a choice in terms of leaders, in terms of the country. Do we tolerate these people?” Trudeau said during an interview on the French-language program La semaine des 4 Julie on Sept. 16, 2021.

Leger found that 44 percent of Canadians say the prime minister and premiers share the blame for the protest in Ottawa because of their condescending attitude toward Canadians who disagree with vaccine mandates and lockdowns.

On Feb. 8, Liberal MP Joël Lightbound criticized his own government for its divisive tone toward the protesters, and for “demonizing” those who have voiced concerns about COVID-19 restrictions.

“I can’t help but notice with regret that both the tone and the policies of my government changed drastically on the eve of, and during, the last election campaign,” Lightbound said at a press conference.

The poll was conducted randomly, surveying members of the Leger Opinion’s representative panel. It has a margin of error of plus or minus 2.49 percent, 19 times out of 20.