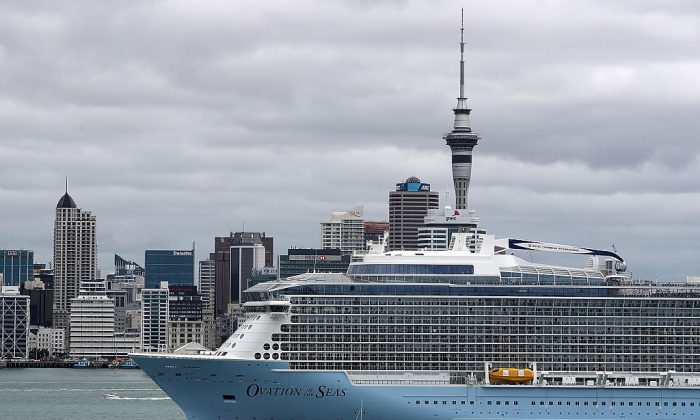 Ovation of the Seas anchored in the Waitemata Harbour on Dec. 27, 2016 in Auckland, New Zealand. (Fiona Goodall/Getty Images)
International

Nearly 200 passengers on a luxury cruise liner have been suffering from vomiting and diarrhoea after catching a bug.

A video posted to Facebook by a passenger showed staff wearing industrial cleaning suits and spraying down corridors.

The Ovation of the Seas is one of the biggest luxury ships and carries more than 5,800 people. It had been at sea for a fortnight when 195 passengers came down with a gastrointestinal illness, reported The Sun.

It is now docked at Hobart, Tasmania where staff are attempting to halt the spread of the bug, which is suspected to be norovirus.

“They are doing everything perfectly to avoid further sickness. I could hear them last night doing this spraying outside my cabin,” one person can be heard commenting in the video.

A letter posted to Facebook from restaurant management said the “Bottomless Brunch” had been temporarily taken off the menu.

One passenger told the ABC that the crew were doing everything in their power to deal with the virus.

“The ship is doing absolutely everything to control it, you wash your hands at least a dozen times a day. Their hygiene is first class, it’s obviously a passenger that’s brought it on,” the passenger said.

Owner of the boat Royal Caribbean International said it would be “comprehensively sanitised and cleansed” before it arrives at its next port in Sydney.

They confirmed they had supplied passengers with over-the-counter medicine for gastroenteritis.

“Those affected by the short-lived illness were treated by our ship’s doctors with over-the-counter medication, and we hope all our guests feel better quickly,” they said in a statement, reported The Sun.

“Meanwhile, we’re taking steps like intensive sanitary procedures to minimise the risk of any further issues.

“We communicate well-established educational hand hygiene practices to all passengers and crew.

“Hand-washing basins are provided at key dining venues and hand sanitisers at all restaurants and bar entrances, where crew are located encouraging guests to use the sanitising hand product.”

They added, “It is imperative that any guests who are experiencing or have experienced any symptoms of illness advise us as soon as possible, so that they can be provided the care required and to prevent any further spread.”

Tasmania’s Director of Public Health Mark Veitch told The Sun: “Outbreaks of highly infectious conditions such as gastro and respiratory illness can occur in cruise ships, where a population the size of a medium-sized town mixes closely together.”