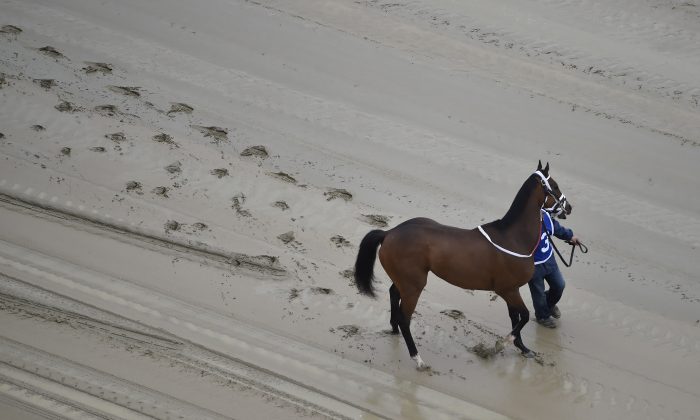 A hot walker moves down a muddy track with Homeboykris before the first horse race ahead of the 141st Preakness Stakes at Pimlico Race Course, Saturday, May 21, 2016, in Baltimore. The horse died shortly after the race, possibly of cardiovascular collapse. (AP Photo/Mike Stewart)
Other US

Two horses died during undercard races of the famous Preakness Stakes at Pimlico Race Course in Baltimore on May 21.

Pramedya, 4-year-old filly owned by Gretchen and Roy Jackson, broke her left front cannon bone during the fourth race on the Preakness undercard, and was euthanized on the track. The filly’s jockey, Daniel Centeno, broke his collarbone in the spill that occurred on a turn of the race that was run on wet turf.

In the opening race of day, Homeboykris collapsed and died shortly after winning and having his picture taken in the winner’s circle. Pimlico officials believe the 9-year-old gelding suffered cardiovascular collapse. The horse was being taken to New Bolton Center in Pennsylvania for an autopsy.

“You never like to see that happen,” Maryland Jockey Club President Sal Sinatra said. “Little different instances—the first one, he actually won the race and on his way back collapsed. So he’ll go for a necropsy. The other horse, he was handling the turf well and I don’t know what happened. I had my inspectors check it out, and everybody’s fine with that (the turf).”

Two deaths in one day is unusual for the sport. But how unusual exactly?

“I am deeply saddened by the tragic deaths of Pramedya and Homeboykris at Pimlico today,” said Wayne Pacelle, president and CEO of The Humane Society of the United States in a release.

“Deaths of horses at the track have been routine, and they are a grim reminder that this is a very poorly regulated industry, with widespread doping of horses.”

The animal welfare organization takes issue with the use of performance-enhancing drugs in the industry, as well as “early-age racing, breeding for speed rather than physical soundness, and inhumane disposition of poor-performing horses.”

It is not known whether either of the dead horses fall into any of the above categories.

Official detailed statistics of horse fatalities are hard to come by. Several estimates in media suggested there were several hundred a year. It seems the number is dropping, at least partly because the whole industry has shrunk over the past decades.

Using these numbers, that would put the fatalities at about 570 last year and 700 the year before.

Since 1989, horse racing shrunk almost by a half in the United States and Canada, the Jockey Club data shows.

Still, as long as the sport continues, and as intense as it is, it’s reasonable to assume accidents, including fatal ones, will continue.

“The reforms should start with strict policies to forbid drugging of horses on race day,” The Humane Society’s Pacelle said. “These policies are urgently needed to protect the welfare of the equine and human competitors.”

Nyquist pipped Exaggerator at The Kentucky Derby earlier this month and was hoping for a chance at the Triple Crown by taking out The Preakness Stakes, then The Belmont Stakes.

But Exaggerator was too good in the sloppy conditions, hanging close to the rail and winning by three and a half lengths. Nyquist faded and pulled in third behind Cherry Wine.