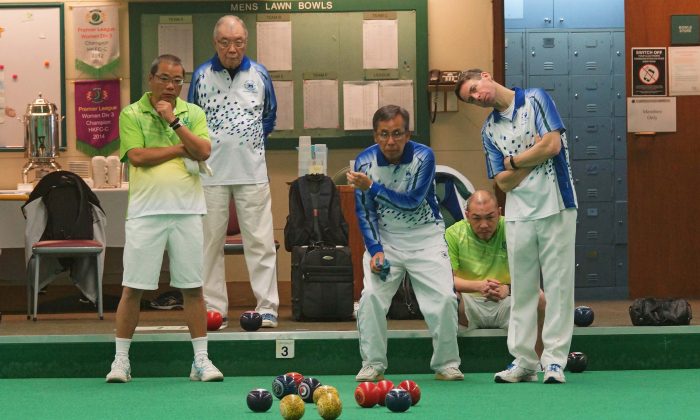 CCC suffered an 8:0 defeat in the hand of the Police before the Chinese New Year break and held a tiny lead of one point before the game last weekend, Feb 4. They traveled to 2013 champions KCC to try picking themselves up from the recent adversity.

In the game two of CCC’s three skippers, Lee Ka Ho and Kevin Fung, accomplished their missions to marginally edge out their opponents. The team skipped by the reigning Indoor Singles champion Stanley Lai faced a lot of trouble against experienced bowler Danny Ho. Lai lost 23-14 eventually and the match ended 4-4.

The second-placed HKFC-B played Filipino Club at their indoor green and did not face too many problems. They won the game 8-0 and bought their total points to 33, which was enough to leapfrog CCC into the leading position.

Third-placed HKFC-A also defeated Kowloon Bowling Green Club 8-0 at their outdoor greens and moved above CCC by a single point.

Despite started the season in brilliant form, CCC dropped a total of 18 points in the last four games which they played away from home. Their game this weekend will be against second-placed HKFC-A at home, and followed by an away game to the current leader HKFC-B. These two games should decide who wins the title.

While the fight for the title has become a three horse-race, the relegation battle is even tenser. In fact if you were not in the hunt of glory, you were in the relegation fight.  The bottom seven teams are only separated by eight points which means one slip could cost dear.

At the moment the bottom club is Club de Recreio who amassed 16 points.  Filipino Club is in front of them with 19 points. Fourth-placed Tuen Mun Sports Association has 24 points. A fierce fight for survival is anticipated.

In the women’s competition, the game between leader Island Lawn Bowls Club and third-paced Seabird Sport Club was not completed as two of the games were not able to finish in time.  However ILBC still held a single point lead against second-placed CCC, who won 8-0 at Indian Recreation Club.

Shatin Sports Association, the defending champion, was now eight points less than the leader and was seemingly out of the title challenge.

HKFC, who won the trophy for five consecutive years before conceding to STSA last term, was now in third position with six points behind the leader.

At the bottom are the Police team and Club de Recreio.