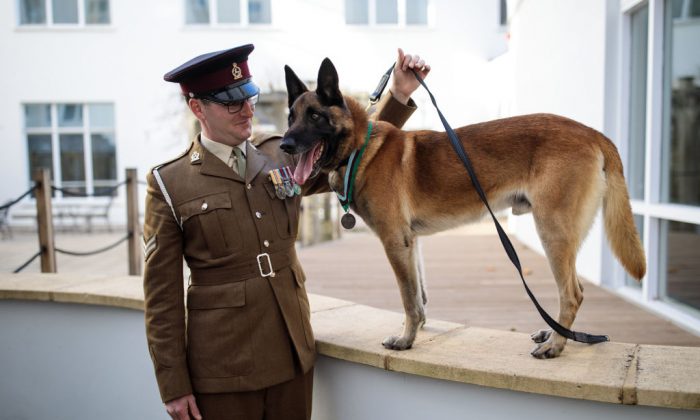 Mali, a Belgian Malinois British Military Working Dog, received the prestigious Dickin Medal in November 2017, after his role in military operations in Afghanistan. Two retired military dogs who were also on duty in Afghanistan reportedly face being put down next week. (Jack Taylor/Getty Images)
UK

Two army dogs that helped save hundreds of lives while on duty in Afghanistan are to be put down because they can’t be re-homed, according to reports.

The dogs, called Kevin and Dazz, face lethal injections next week after it was ruled they were not safe to be re-homed.

The Belgian Shepherds identified lethal IEDs, or improvised explosive devices, while on tour before being retired, The Sun reported.

Distraught dog handlers and ex-soldiers have vowed to give them “every chance possible to be housed and not killed.”

Former SAS officer Andy McNab launched an online petition to save the two dogs, as well as a third ex-police dog named Driver that is facing being put down. The petition has already racked up over 13,000 signatures at the time of writing.

Plans to put down hero service dogs Kevin, Dazz and Driver are in place to happen next week. . Please Sign and Share this petition to put stop on this .https://t.co/rOyFKalPLM

“Kevin and Dazz served in Afghanistan where they searched for explosives and Driver worked for the police force,” McNab wrote on the petition page.

“Service dogs have saved my life on numerous occasions. We have a duty to save them.

“In Afghanistan when I was on a patrol the dogs found an IED in front of us, I was number three in line, I was very, very lucky to survive.

“They also saved countless lives when I was in the Special Air Service sniffing out explosives.”

The Sun reported that distressed dog handlers have written to a defence chief in the hope that the decision will be turned around.

One handler told the news outlet: “People who worked closely with these dogs are devastated at the plans—they’ve begged to save them all.

“There’s no protocol to decide if a dog is put down. The commanding officer decides and that’s it. It’s such a cruel way to treat ­animals that have given so much.”

“Wherever possible we endeavour to rehome military working dogs,” an Army spokesman said to the newspaper.

“Sadly there are oc­casions where this is not possible.”

According to The Mirror, the Armed Forces put down 58 dogs in 2015 alone.

The decision to put down the dogs comes a couple of weeks after a military dog called Mali was awarded the Dickin Medal for helping to save the lives of Special Forces troops in Afghanistan.

The 8-year-old Belgian Malinois was seriously injured during the operation, the Forces Network reported.

Support our independent journalism by sharing this article on your social networks. Thank you.