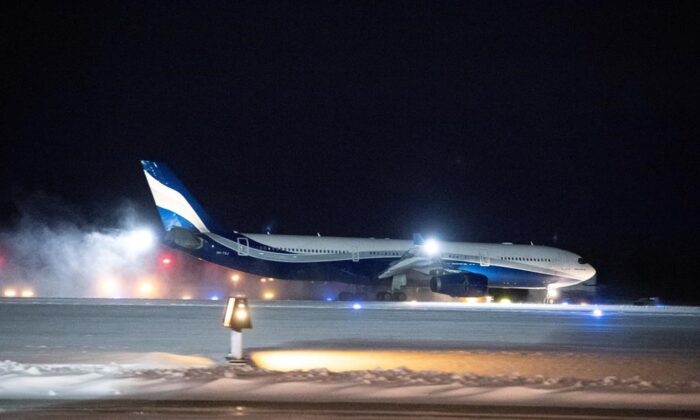 A plane carrying 176 Canadian citizens from the centre of the global novel coronavirus outbreak in Wuhan, China, lands at CFB Trenton, in Trenton, Ont., on Feb. 7, 2020. (The Canadian Press/Justin Tang)
Canada

CFB TRENTON, Ont.—Family members looked forward to reuniting with loved ones after two groups of weary Canadian citizens finally returned home Feb. 7 from the centre of a novel coronavirus outbreak in China.

One Canadian government flight carrying 176 people touched down just after dawn at Canadian Forces Base Trenton, Ont., where they were to undergo two weeks of quarantine and monitoring to check whether they’ve contracted the virus.

Media were kept well away as the passengers deplaned and stepped onto waiting buses in frigid weather.

Richard Fabic, the father of 15−month−old Chloe, hoped to be joining his daughter in quarantine later in the day.

Fabic, of Mississauga, Ont., said Ottawa had reached out to ask him if he wanted to join his daughter.

“I said yes before they even finished the sentence,” Fabic said. “It’s very considerate, very thoughtful, I was really blown away from being given that option.”

The 14 days in quarantine will be “bonding time” with his daughter, Fabic said.

Another 39 Canadians arrived in Vancouver early on Feb. 7 morning after they were able to board a flight chartered by the U.S. government.

The Canadian government planned to fly them to CFB Trenton, where they will also be under quarantine.

Fabic said his wife had mixed feelings about him being in isolation with Chloe, because she wanted to be the one in there.

“I just want to spend time with my daughter and also help with taking care of her,” Fabic said.

The past few weeks have been stressful, he said, adding he was excited at the prospect of the reunion.

His daughter has all the entertainment she needs in quarantine, Fabic said, but just in case he planned to load up his tablet with movies and shows.

Foreign Affairs Minister Francois−Philippe Champagne said on Feb. 7 that the government is now turning its attention to a second flight it has chartered for any more Canadians in Wuhan who have asked for help to leave. It is scheduled to depart Feb. 10 and arrive at CFB Trenton the next day.

“It’s quite a good thing that we have a bit of time in between,” Champagne said in Ottawa.

About 11 million people are currently under quarantine in the central Chinese city, where the coronavirus is believed to have originated.

Myriam Larouche, a Canadian student who was studying in Wuhan, said she was relieved to be back home after a long process that felt longer in a different country.

“I think I’m going to sleep for 20 hours straight,” Larouche said after arriving in Vancouver, adding that the last few days have been stressful.

Health authorities have documented five confirmed cases of the new coronavirus in Canada so far, and say the quarantine is necessary to ensure the virus doesn’t spread further.

On Feb. 6, two more presumptive cases of the novel coronavirus were diagnosed in British Columbia, where a total of four people have now been sickened with the illness.

The government is also monitoring the well−being of 285 Canadians quarantined on two cruise ships off the coast of Japan and Hong Kong.

There are seven Canadians with confirmed cases of the coronavirus contracted aboard the Diamond Princess cruise ship docked in the port city of Yokohama, just outside Tokyo. Those patients have been taken to Japanese hospitals for treatment and monitoring.