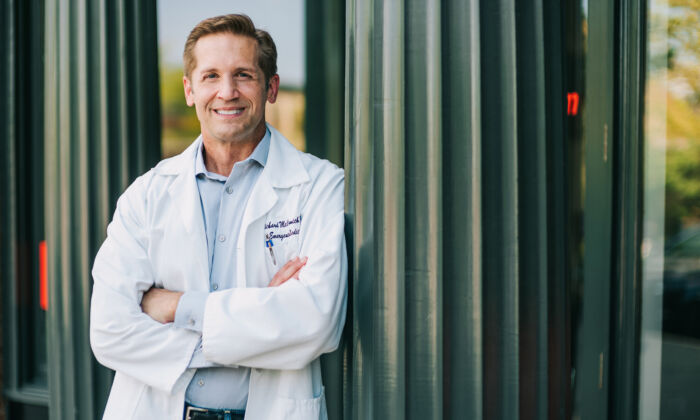 The two candidates running for an open North Georgia Congressional seat each see an opportunity.

Rich McCormick, the frontrunner in a district drawn for a Republican, sees it in his party’s growing appeal to minorities and women, work he thinks he is cut out to do.

Democratic nominee Bob Christian, facing an uphill battle in a district stretching from Atlanta’s northern suburbs to the edge of Georgia’s northern mountains, sees his opportunity in the newcomers flooding the area since the pandemic began.

District 6 was once a Republican stronghold in the suburbs. It launched Newt Gingrich on a path to becoming Speaker of the House, Johnny Isakson toward the U.S. Senate, and Tom Price to becoming Donald Trump’s secretary of health and human services.

But the district became more purple as the suburbs expanded and the proverbial “soccer moms”—suburban women—rejected Trump. Lucy McBath won the seat as a Democrat in 2018, defeating incumbent Karen Handel, and beat her again to get reelected in 2020.

The Republican-controlled redistricting process dropped some of its suburban areas and added more safely red ones further from Atlanta. It reaches north all the way to Amicalola, the southern terminus of the Appalachian Trail in the foothills of the mountains.

Or are they indeed safely red?

Christian says around 75,000 people moved into the district during the pandemic. He notes that exurban Forsyth County north of Atlanta was the 7th fastest growing county in the nation last year and 3rd fastest growing in the previous 10 years.

“If even half of them lean blue, it’ll change the balance dramatically,” Christian told The Epoch Times. “Whether they bring their politics with them, that’s the key. We’re angling hard to find those.”

“Plus, there are a lot of disaffected Republicans who will stay home or consider voting for a Democrat.”

Christian said Cook’s Political Report showed the Republicans with a 24-point advantage during the spring, but that had shrunk to 11 points. “And we expect it to be [10 points] or less by the next quarter.”

McCormick laughed off that angle.

“He should worry more about losing ground in the city, not gaining ground in suburban areas,” McCormick told The Epoch Times.

Minorities and women are often natural conservatives, but Republicans missed past opportunities to appeal to them, McCormick says.

Meanwhile, in recent Congressional elections, Republican gains have been disproportionately minority, female, or veterans such as himself.

“We can gain lost ground with minorities and women when they find out they think like us,” he said.

McCormick said that despite its North Georgia presence—which may translate in people’s minds to “white and Republican”—the district features large minority populations. There are up to 70,000 Indians in the district, tens of thousands of Koreans, and more than 100,000 African-Americans.

McCormick, an emergency medicine physician, said he welcomed the challenge of trying to win their votes. His ties with the Indian community? One in five doctors is Indian. Koreans? During his 16-year military career —he was an officer and Marine helicopter pilot—he served three tours in Korea.

McCormick went to the historically black Morehouse School of Medicine. “The school was 60 percent female, 80 percent black, and 95 percent liberal, and I was elected student body president senior year. It was more about relationships than it was about politics.”

Before that, while doing pre-med studies, he’d been the Marine instructor within Navy ROTC for Atlanta’s historically black colleges, Morehouse, Spelman, Clark Atlanta, and Morris Brown.

“We need to win back minorities and women. They are natural allies. Many were turned off by [past Republican] rhetoric.”

Christian, his opponent, is also a veteran. He was a communications non-commissioned officer for a recon unit and spent a year in Iraq during and after the 2003 invasion.

After the Army, he managed restaurants in Colorado Springs, Colorado, including a Hooters. “It was one of the more entertaining jobs I had but not as much as you would think,” he told The Epoch Times.

He co-owned a local pizza chain branch and managed five of its restaurants.

They moved back to Georgia—Christian had grown up in a military family that moved a lot, but they called Georgia home—and managed the dining facility at the University of North Georgia in Dahlonega. He and his wife live outside Dawsonville.

Christian sees the growth in the 6th District as a significant issue. They need to keep the district’s schools good—Forsyth County’s are among the top in the state—and expand infrastructure like roads and broadband while balancing that with environmental concerns.

Traffic has begun to outgrow and overwhelm the area’s road links to Atlanta.

The Biden administration’s infrastructure bills set aside money for rural broadband, and the current Democratic representatives, McBath in District 6 and Carolyn Bourdeaux in District 7, have done well getting money for the areas that will be in the new District 6.

“I want to continue in their footsteps,” Christian says. McBath ran in District 7’s Democratic primary this spring after redistricting and defeated Bourdeaux, leaving the new District 6 seat open.

Christian wants to end gerrymandering, establishing an independent commission to draw the districts.

McCormick lost the District 7 race in 2020 to Bourdeaux, and after redistricting, decided to run in District 6. He lives in Suwanee, where Districts 6, 7, and 9 meet on the new map. He wants the government to do less, a lot less. And he thinks many women and minorities are natural conservatives. They just don’t know it yet.

Republicans were founded on the abolition movement and responsible for most civil rights advances over the years, he says.

“You’ve got one party moving toward Marxism and funded by billionaires versus a party that is about empowering people over government,” he says.

He points to the recent migrations from California and New York—two states with “topography, geography, and industry on their side, yet for the first time in history, they’re losing population. Their governments have become socialist, and no one wants that.”

“We should never have people fear the government.” McCormick criticized the “huge expansion of the IRS” and said the 87,000 new agents “won’t go after millionaires and billionaires.”

He says that rich people and big corporations are well defended by CPAs, more than a match for most IRS agents.

“They’ll go after middle and lower-class people. Waiters who aren’t giving all their tips over.

“If we do this right, we’re building allegiances with demographics that should have always been on our side but that we lost.”