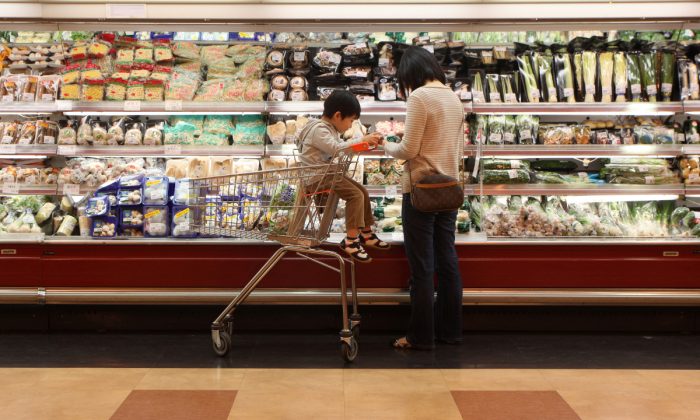 A woman and boy in a supermarket in China. (Ed Jones/AFP/Getty Images)
Social Issues

The bad behavior of two children from two different families caused a public drama between the families over group text messages, according to Chinese state-sponsored media Spot News. Both families live in Shenzhen City of China’s southern Guangdong Province.

A woman, surnamed Wu, was seen on camera at a chain store market in Shenzhen on June 21 with her son, who stole a handful of bulk sugar when he was out of her sight. About a month later, Wu complained over a group text that another boy had misbehaved in their housing community. That boy’s father happened to work at that same market from where Wu’s son had stolen the sugar.

In response, the father publicized the surveillance footage online on July 20 which showed Wu’s son stealing sugar from the market.

Wu then called the police, which resulted in the father apologizing to her.

Wu went to the local market in their housing community with her son and daughter on June 21. The market is known as Vanguard Market and is a chain in China.

Security camera footage shows the boy opening a bulk case of sugar, stealing a handful and putting it directly into his mouth. His mother, though by his side, was looking the other way at that moment. After catching the boy on camera, a supermarket employee informed Wu of what her son had done.

“I was mortified when I saw the video, and I gave the boy an ugly look,” Wu told Spot News. “I said, ‘Look at you, how can you do that?'” Wu then offered to pay for the sugar. The store refused compensation and just asked her to better discipline her son.

Just about one month later, on July 20, the manager for Wu’s housing community sent a group text, informing parents about the bad behavior of some children in the community. The text included a video of a young girl pressing all the buttons in an elevator—over 30 floors of buttons.

Though the girl was unrelated to Wu, she added a comment in the text messages about three boys who lived on one floor.

“There are three boys, about ten years old, who usually play together. I often see them kicking the elevator door in [our community], kicking it one after another. The father of one of the boys works at Vanguard Market.”

“I just expressed myself. These spoiled kids need their parents to discipline them,” Wu told Spot News. “One floor on this building has three really badly behaved boys.”

However, the mother of the boy who Wu singled out in her comment on social media snapped back at her. “You’re mistaken, my kids are not at home,” the mother wrote to Wu through text message, according to Spot News. “If you don’t know, don’t just recklessly talk.”

Then that night, the father who Wu had called out, shared a video in the same group text. That video showed Wu’s son stealing sugar from Vanguard Market one month earlier. Wu’s more significant concern was that her son’s face, as well as her own, were not censored with mosaics.

“A mother of my son’s classmate even sent me a message, ‘Is the boy in the video yours? How can your son behave like that?'” Wu told Spot News. “I was so embarrassed at that time!”

Wu argued that if such a video is going to be exposed, then the people involved should have their faces censored in some way. In response, she called the police.

When the police spoke with the father, he indirectly admitted to sending the video. He expected an apology from Wu because he said that she provoked him first, according to Spot News.

Wu argued that she had not included any specific information about the boy that she mentioned, leaving out his name. The video, however, clearly identifies Wu and her son.

The manager at Vanguard Market said that it was used as training material for employees, and was not intended to be made public. As a result, the father that shared the video had to apologize to Wu.