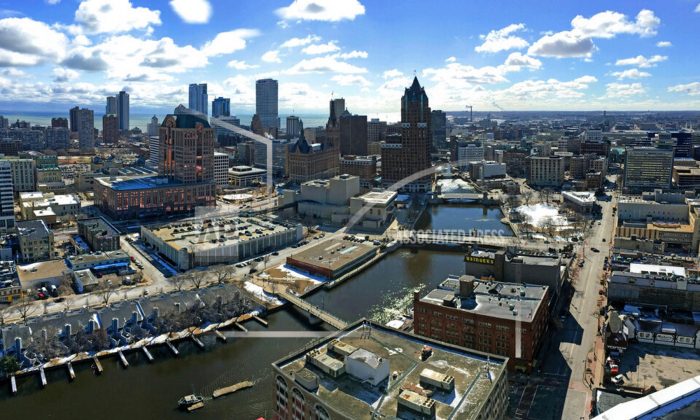 The downtown skyline of Milwaukee on March 7, 2018. (Mike De Sisti/Milwaukee Journal-Sentinel via AP)
By Jack Phillips

Two leaders of Milwaukee’s host committee for the 2020 Democratic National Convention were fired on Feb. 4 amid an investigation into concerns about the organization’s work environment.

Liz Gilbert, who served as the president of the host committee, and Adam Alonso, the group’s chief of staff, were ousted after staffers raised concerns several days ago, according to the statement.

It stated that their work can’t be done “unless members of the staff can work collaboratively,” adding that the committee “is committed to an inclusive and supportive environment.”

The exact nature of the allegations hasn’t been made public.

Peg Schaffer, an attorney for Gilbert, told the Journal-Sentinel that it was “disgruntled staff who, when confronted with a strong woman leader, is using the euphemism of a toxic workplace to complain about their boss.”

It’s another unfavorable development for the Democratic Party just days after the Democrats’ Iowa Caucuses drew criticism for delayed results and technical problems. Democratic caucus officials weren’t able to release the results until about a day later, on Feb. 4.

The Democratic National Convention, where delegates of the Democratic Party will choose the party’s nominees for president and vice president, will be held July 13–16 at the Fiserv Forum in Milwaukee.

Teresa Vilmain, who was described by the group as an experienced convention staffer, will now manage the organization’s day-to-day operations for the time being.

“The Democratic Party is firm in our belief that every person deserves to feel safe and respected at their place of work, and we will always take seriously claims of bullying and workplace harassment,” he said in a statement to the Milwaukee Journal Sentinel.

Solmonese added that his group “is moving forward with a plan to restore an office culture that aligns with the values and expectations of our party.”

According to The Hill, the host committee, described as the nonpartisan arm of the convention, oversees recruiting some 15,000 volunteers and raising $70 million to stage the event.

“None of this should get in the way of us having a great convention to showcase Milwaukee,” Mayor Tom Barrett said in a statement to Fox6.