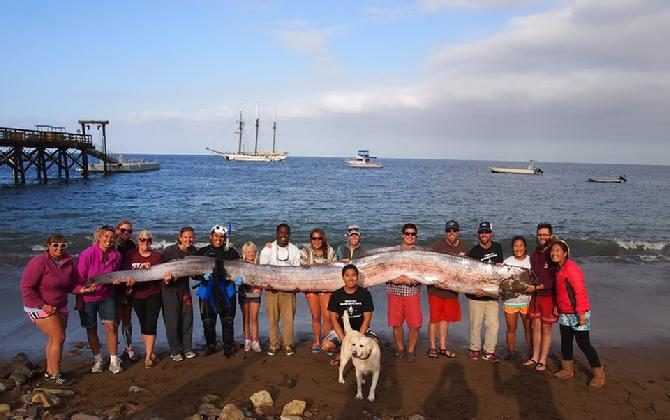 Not unlike a sea serpent spoken of only in legends, an extremely rare 13.5-footlong oarfish washed up on a beach in Oceanside Harbor, Calif., Friday, Oct. 18. The discovery comes less than one week after an 18-foot oarfish was found near a shore also in southern California.

Scientists have positively correlated the movement of frog populations with earthquakes. Days before any seismic activity, they flee their colonies. The phenomenon remains largely unexplained.

In the classics, the Greek gods would often send eagles to portend their will. Not unlike those omens, two eagles locked talons and fell to the ground at Duluth International Airport, in Minnesota, in May of this year.

In the Bible, dead fish in the Nile River warned the pharaoh to release the Israelites from captivity. Are they so unlike our dead sea serpents on the shores of southern California?

The devastation to our natural habitat is the most obvious culprit. Could the radioactive waters of Fukushima—to take one example among many possibilities—be affecting life in the depths of the Pacific Ocean already, perhaps in new ways yet unknown? People are still eating fish from America’s West Coast with scientists giving the official green light, at least for now.

Let me repeat the last part: at least for now. The writing on the wall is that we are doing irreparable damage to our planet. The water and the air, sure, but even the fabric of what is commonly conceived to be the building blocks of our material existence, atoms, is irrevocably warped by nuclear waste that comes from even nuclear power plants that don’t get devastated by earthquakes.

Yet, even now, England is planning its first new nuclear power plant in 30 years. England realizes that the renewable resources it has been pursuing, like wind power and solar power, just don’t reap the returns needed to keep society chugging along and leaders elected.

Looking for a Way Out

Acclaimed physicist Stephen Hawking has read the writing on the wall. He wants humans to find homes on other planets. But, he acknowledges that the technology is extraordinarily far off.

What if the wall, so to speak, actually extends even further and contains even larger writing than what Hawking is aware of? His solution is confined by the concepts of modern science itself. If that is all we are dealing with then there is really no way out. But what does science leave out?

Modern science, the kind endorsed and stratified by a vast network of scientific organizations and universities, has no proof that virtue exists, that souls exist, that gods exist, or that heaven exists. Thus, modern science—perhaps inadvertently—casts doubt upon them. Yet beliefs in these are universal across cultures. These beliefs stratify and exalt moral and altruistic behavior that benefits our entire human race.

Could it be that these spiritual foundations of the human experience exist on a level that supersedes what is scientifically observable and testable? If so, could they offer a way out to humankind to which modern science is oblivious?

Real answers to omens like the two dead oarfish and Hurricane Sandy come, not from pressing forward with the scientific model we already have—which manipulates people into doubting their own innate spiritual inclinations—but rethinking the very premises upon which the model was built.