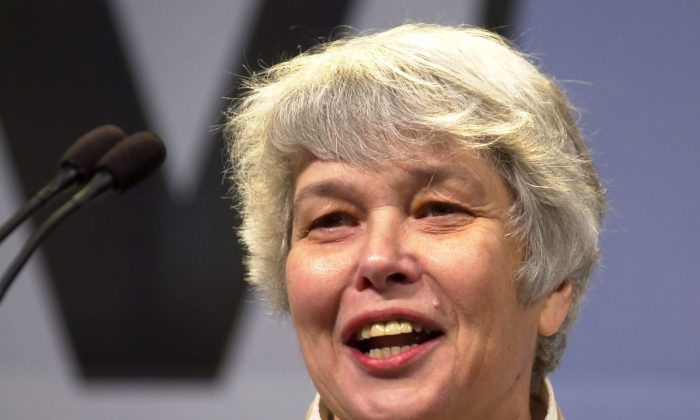 Gwendolyn Gillen addresses the crowd prior to the unveiling of the statue in Minneapolis, in this file photo. (AP Photo/Ann Heisenfelt)
Entertainment

MADISON, Wis.—Gwendolyn Gillen, a Wisconsin artist whose bronze sculpture of Mary Tyler Moore tossing her hat became a downtown Minneapolis landmark, has died. She was 76.

Gillen’s daughter, Alessandra Gillen, says her mother died Friday in hospice care at Madison Heights Senior Community in Madison, where she had lived since 2013. Gwendolyn Gillen died two days after Moore died at the age of 80.

Alessandra Gillen tells the Milwaukee Journal Sentinel her mother was most proud of the Moore statue.

In 2002, Gillen’s life-sized statue of Moore was dedicated on Nicollet Mall, a pedestrian mall near where Moore threw her tam in the opening credits of her 1970s TV show, “The Mary Tyler Moore Show.”

The statue is now on display in the Minneapolis Visitor Center during mall reconstruction.