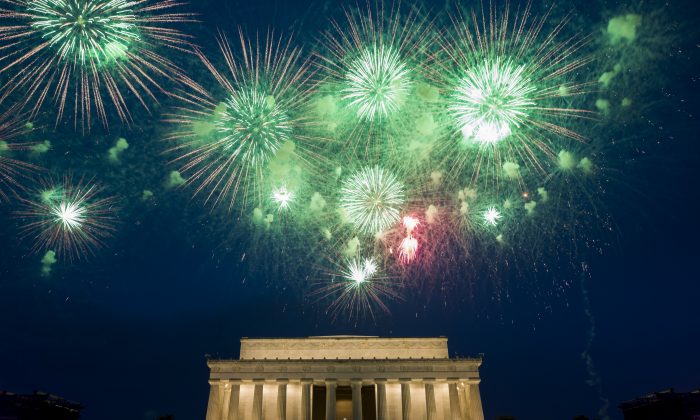 Fireworks light the sky near the Lincoln Memorial, in Washington on July 4, 2019. (AP Photo/Alex Brandon)
Viewpoints

This week, we celebrate our country’s birth. Patriots honor the American Republic as a polity dedicated to the goal that all may live safely and securely in the enjoyment of their inalienable, God-given rights.

We are inspired by the high idealism of the Founding Fathers. We are stirred by the poignant remembrance of all those who have fought, worked, and sacrificed to make the United States what was, until two generations ago, the freest and most prosperous country in the history of the world, and which still is well above the global norms of both those criteria.

Our joy may be tempered by the realization that liberty and prosperity appear to be at significant risk today. Particularly dismaying about this challenge to America is that it comes from within.

While the following statement is always true to some extent, today it’s of existential importance: There’s a battle being waged for the soul of our country. It’s a battle of competing visions and values, philosophies and principles. It’s a struggle between those who adhere to the Founding Fathers’ noble principles and those who—whether from personal grudges or delusional self-importance, demoralized character or spiritual dullness, warped intellect or diabolical ideology—wish to “fundamentally transform” our beloved republic into some sort of Big Government centrally planned monstrosity.

There are myriad alternative philosophies to Americanism, more than can be listed. What all of them have in common is that they either repudiate American values, ideals, and principles outright, or compromise them in some way. To varying degrees, they are illiberal, atavistic, elitist, “Old World” philosophies. They all have been tried before and have been found wanting. They may be repackaged to appear as new, fresh, progressive ideas, but they belong to other times and places. For convenience, I’ll lump together these anti-American philosophies under the label “alien,” since they are foreign to America’s founding principles.

Following is a partial list of the fundamental differences between Americanism and the alien philosophies that oppose it. Feel free to add to this list:

Americanism holds that government and law should be negative—that is, that they should tell us what not to do. Americanism views the purpose of law and government as protecting citizens and residents by preventing the violation of individual rights. Negative law limits the scope of government. Alien alternatives favor positive law (both in the sense of elevating man-made laws above natural laws, and in the sense of telling people what they must do instead of what they must not do). This philosophy confers upon government and law a virtually unlimited scope.

Americanism believes that government should act as an impartial umpire tasked with upholding impartial rules and letting the most talented and industrious reap the economic rewards of their efforts. Alien counterfeits believe in an intrusive, activist government that becomes the dominant economic player and picks winners and losers.

Americanism is predicated on the rule of law—the blind and impartial administration of justice that cares not whether a person is rich or poor, black or white, strong or weak. By contrast, the alien philosophies call for a system of privileges—that is, discriminatory laws that rob Peter to pay Paul.

Americanism honors private property and upholds voluntary economic exchange as a fundamental human right. The alien attitude is to disparage and abrogate property rights and to use money taxed from some citizens to buy votes from other citizens on the receiving end of those funds. Thus, alien philosophies exalt the value system of criminals and institutionalize theft as the normal modus operandi of government.

Americanism asserts that the right and legitimate way for individuals to prosper is to earn a living by providing something of value for others. The alien worldview holds that it’s perfectly legitimate for individuals to enrich themselves via the political process (called “cronyism” or “rent-seeking”), whereby some are given wealth that others have produced. In short, the American believes in making wealth; the alien, in taking it.

Americanism affirms that all men are created equal in the eyes of God—that everyone is entitled to receive equal legal and governmental protection of their rights. Alien philosophy holds that nature or God (depending on who its proponent believes is the creator of mankind) blew it by making us different, and, therefore, it’s up to “enlightened” (read: elitist) government leaders to remedy the defective natural order by making everyone economically equal.

Americanism’s fundamental tenet is that citizens of our republic are the masters, and government the servant. As Thomas Jefferson articulated it in the Declaration of Independence, the legitimate purpose and function of government is to secure citizens’ God-given rights. Consequently, “That whenever any Form of Government becomes destructive of these ends [i.e., when governments violate rights rather than upholding them] it is the Right of the People to alter or to abolish it.”

The alien philosophy throughout its long and tragic history has exalted and still exalts government officials as masters directing the affairs of a subservient citizenry.

In sum, the American philosophy is liberty; the alien philosophy is tyranny. Ultimately, one or the other will prevail, for the two cannot coexist. We all know the choice we will have to make if our children are to observe their Fourths of July as celebrations of liberty as a living, daily reality rather than as a dim historical artifact.