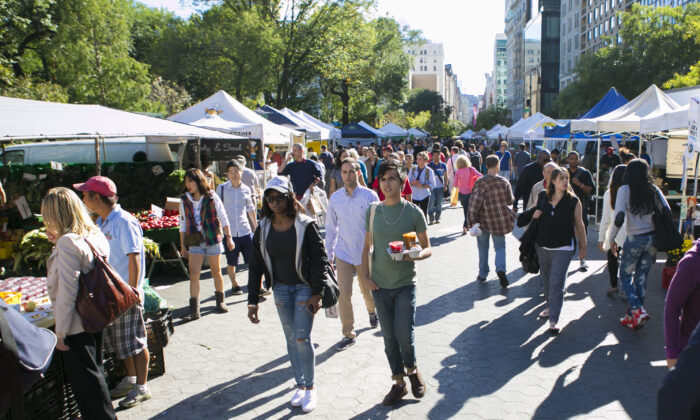 Last month, a friend forwarded a link to a hugely important article by David Brooks. Title: “I Was Once a Socialist. Then I Saw How It Worked.” Subtitle: “Two cheers for capitalism, now and forever.” This was a truly astounding article for two reasons.

First, I was astounded that this article was published in The New York Times. Brooks is the Times’ resident (token?) relatively conservative writer, but still, in light of how overwhelmingly the NY Times favors the socialist Democrats, it’s stunning (and admirable) that they gave space to a dissenting opinion on the central issue of the 2020 national election: socialism versus capitalism.

The other reason I consider Brooks’s article astounding is its sheer power. He brilliantly dismantles the pretenses of socialism with devastating directness, uncommon clarity, and relentless truth. Time after time I was so impressed with Brooks’s eminently quotable, crystalline explanations that I mentally gave him the greatest compliment one writer can give another: I wish I had written that.

Brooks assembled all the main reasons why capitalism is superior to socialism. He did so not as an economic theoretician, but as a down-to-earth journalist. Brooks traced my own earlier ideological odyssey. In college, we were enthusiastic supporters of socialism. Out in the real world, observation led him to the only reasonable conclusion: Capitalism dramatically advances human prosperity; socialism retards, undermines, and ultimately obliterates prosperity.

He reels off fact after telling fact:

“Capitalism has brought about the greatest reduction of poverty in human history.”

Socialist central planners “can never gather all relevant data, can never construct the right feedback loops” or possess all the specific knowledge needed to master, improve, and update modes of production.

Environmental degradation is much worse in socialist countries than in capitalist societies.

Socialist “rulers turn into gangsters. A system that begins in high idealism ends in corruption, dishonesty, oppression and distrust.” Contrary to all the socialist rhetoric about “equality,” actual socialism “produces economic and political inequality.”

As superbly as Brooks articulates why human societies need to embrace capitalism and avoid socialism, his article nevertheless ultimately takes an unfortunate turn. He prints a wish list for government intervention to address some of the economic and social problems that capitalism hasn’t solved.

He calls for “wage subsidies and mobility subsidies,” “tax subsidies for health care,” “a massive infusion of money … into our education systems,” and so on. (Now it becomes clear why The New York Times published this article.)

It’s unarguably true that free markets haven’t solved all economic problems. Unfortunately, here Brooks falls for the same non sequitur that animates all progressives and socialists: the notion that if one has a vision for how to help one’s fellow man, then one is justified in using government power to compel others to pay for wanted reforms.

Would-be reformers aren’t content that, under capitalism, they are perfectly free to use their own time, energy, and financial resources to work—either individually or in voluntary cooperation with others—to open businesses that pay higher wages, establish foundations dedicated to helping workers relocate, open better schools, and so on.

The presumption that one is morally qualified to enlist the power of government to force others to bear the burden of one’s own vision for a better society is the seed from which tyranny grows. It’s an assault against individual liberty. Indeed, it’s self-contradictory for Brooks to advocate capitalism and then assert that the state should have the power to redistribute wealth, thereby abridging the property rights that are the essence and basis of capitalism.

Furthermore, his vision of “capitalism with modifications” is politically naïve. Brooks isn’t a leftist revolutionary, but a moderate whose intentions are benign, but he too glibly assumes that all reasonable people will agree with him as to what particular interventions are needed. There’s no such agreement today, nor any reason to hope for such an agreement to evolve.

The problem with using government to help A and B with certain economic needs is that C and D need help, too, with other economic needs. A Pandora’s box is opened. There’s no bright line to mark where government intervention should stop. Once the progressive/socialist tenet is accepted that it’s the government’s duty to actively boost citizens’ economic wellbeing (in contrast to the more limited traditional role of American government to keep citizens safe and free—a system that led to the United States becoming the wealthiest country in the world), the role of government becomes infinitely expandable. This is the road to socialism.

The myriad forms of federal intervention already in place have saddled our youth with tens of trillions of dollars of government debt and unfunded liabilities. That Brooks apparently is willing to increase that debt burden even more is, frankly, disappointing and appalling.

It’s perplexing that Brooks (given his understanding of socialism’s deficiencies) calls for a large increase in government involvement in different areas of the economy. Can’t he see that government intervention tends to raise prices—e.g., in health care and higher education? This apparent blind spot is especially strange given that his article correctly identifies government’s inability to achieve efficiency because it operates outside of market prices. That precisely is the inescapable problem in any government bureaucracy. (See Ludwig von Mises’ 1944 book “Bureaucracy.”)

Think about it: What is socialism but a complete system of government bureaucracies? The lengthy track record of bureaucratic waste and inefficiency in our own country provides us with a sneak preview of what conditions would be like under the total bureaucratic mismanagement of socialism.

As noted above, Brooks subtitled his article, “Two cheers for capitalism.” By this he means that while capitalism has been a great boon to the human race and is worthy of our praise and gratitude, it hasn’t produced perfect results. On this point he is absolutely correct. However, like many people of good will, Brooks is at least somewhat under the beguiling but treacherous influence of utopianism. He is holding “three cheers” of approbation in reserve for perfection.

But this is the human reality, utopian dreams notwithstanding: Perfection will forever be unattainable in human societies comprising manifestly imperfect human beings. Capitalism is no panacea, because there are no economic panaceas.

Unlike Brooks, I believe strongly that capitalism deserves three cheers—not because capitalism is or ever can be perfect, but for the salient fact that it’s by far the best system for prospering humankind that the world has ever known. Brooks’s article itself makes that very point. We shouldn’t let the perfect be the enemy of the best. Three cheers for capitalism!