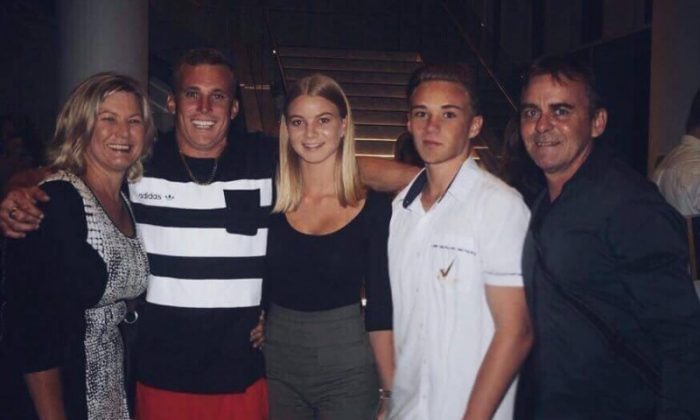 Brock Prime (2nd to the left) and his family. (GoFundMe/Prime Family Support)
Australia

Police have arrested two men in relation to a brutal road rage attack which left 29-year-old Brock Prime fighting for his life after “five centimetres of his skull was crushed into his brain.”

Prime, a Gold Coast tradie, remains in a coma at the hospital following a vicious attack by a group of people on the M1 Pacific Motorway in Queensland, Australia, on Feb. 24, reported 9News.

“His left side will be like a stroke victim,” Prime’s mother Donna told the Gold Coast Bulletin yesterday.

“Because he’s already had to take a quarter of his brain, five centimetres of his skull was crushed into his brain with dirt and concrete and stuff so they had to remove all that and clean it out so they know it’s already damaged.

“That’s why they know his left side will be done.”

Police said 26-year-old Jonathan Lawrence from Surfers Paradise and an unnamed 27-year-old from Ormeau have been arrested and charged, each with one count of grievous bodily harm, police said in a statement late Sunday night.

Lawrence was not present in Beenleigh Magistrates Court today during the brief mention and his defence did not make an application for bail. He will be remanded in custody and appear again for another mention tomorrow, reported the Gold Coast Bulletin.

Two men charged over the alleged serious assault of a 29yo man on the M1 at Yatala last night. https://t.co/jZnbGYi6O5

A “cat and mouse game” then occurred where both vehicles started weaving through traffic in wet conditions on the motorway. The drivers of the two cars then pulled over on the side of the road and a physical altercation occurred, according to police.

“The actions of both of these vehicles were extremely dangerous,” Thompson told reporters, reported the news website.

Police allege that the group of men continued to attack Prime even though he was already knocked to the ground. The men then got back in the van and fled, leaving Prime unconscious on the side of the road, reported Gold Coast Bulletin. A 22-year-old man who was a passenger with Prime was uninjured during the incident, police said in a statement.

Police have released vision in relation to the serious assault of a man at Yatala on Saturday night. https://t.co/WWf3rMKvRX

Queensland Police have released footage of the incident and continue to appeal to the public for more information.

According to Sunday’s statement, police were looking for up to 13 people, who fled the scene before police arrived, after a Subaru Forester station wagon and a white van stopped on the side of the motorway between Pimpama and Yatala around 9:30 p.m. and a physical assault ensued.

An “unknown weapon” was used in the attack by the people in the van. Police will allege Prime was bashed with a metal bar believed to be a tyre iron or crowbar, reported Gold Coast Bulletin.

Donna said her son was the primary breadwinner for the family after her husband’s sudden passing last month. Prime had been working six days a week as a concreter.

“Brock’s been our rock,” Donna said.

“He’s been working six days a week so we wouldn’t lose our house because we’ve got younger kids who are still at school and uni.”