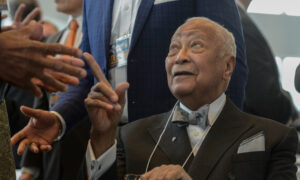 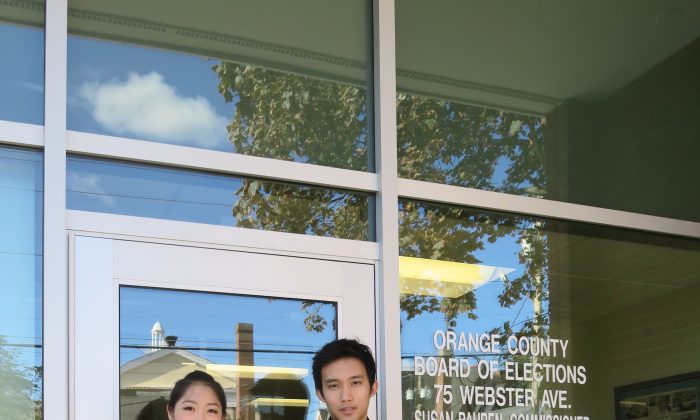 Ashley Wei (L) and Andrew Fung hold up their U.S. passports outside the Orange County Board of Elections office in Goshen on Oct. 6, 2015. Both Wei and Fung were there to clear the record after the Board incorrectly canceled their voter registration over questions of their residency.
New York

The two voters, both Fei Tian College students residing at 140 Galley Hill Road in Cuddebackville, were erroneously told in mid-September that their voter registration was canceled because they were green card holders. As Epoch Times previously reported, one had been a U.S. citizen since 2005 and the other since 2011.

The source of the confusion appears to stem from incomplete or faulty records obtained from Immigration and Customs Enforcement (ICE). In an email obtained by Epoch Times giving the rationale for the Board’s decision, it says, “I contacted the ICE in regards to the 30 voter challenges … most had no record in our system.”

The writer of the email, whose name is redacted but is presumed to be from the sheriff’s department, lists Ashely Wei and  Andrew Fung, the two misidentified U.S. citizens, and says, “so far it looks like the last two would not be eligible to vote.”

In a letter to the two students, the Board of Elections said it had “received the completed investigation information from the Orange County Sheriff’s office … the investigation has concluded that you are a lawful permanent resident but a green card holder.”

The email gives 11 other names who are either citizens from birth or by naturalization.

Board of Elections Commissioner, Susan Bahren, would not comment on the mix up but confirmed that the two supposed green card holders had been cleared to vote and the rest of the confirmed citizens would be notified shortly. Up until this point, they had received no correspondence from the Board after they were notified of the challenge. Anyone unsure of their voter status can come to the Board with proof of citizenship, Bahren said.

The sheriff’s department was charged with investigating the registrants after Town of Deerpark Supervisor Gary Spears issued a challenge, citing the Asian names and use of 140 Galley Hill Road as the permanent residence for 30 voter applicants. That address is used by Fei Tian College and its dormitory.

On Sept. 22, the New York State Attorney General’s office opened an investigation into whether this was a case of voter discrimination and intimidation.

Ashley Wei, one of the aforementioned students, said the challenge made her feel disrespected and an outsider in the small, rural community.

“I grew up learning about and admiring the privileges that citizens have here,” she said in an email. “I’m sure the local institutions in Deerpark do not operate on a lower standard than the rest of the country, and I’m just happy that my right to vote, which was previously revoked due to inaccurate investigations, was returned to me.”