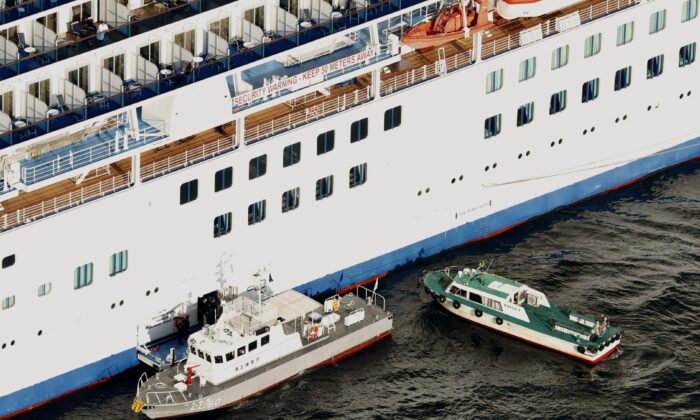 Two Canadians on a cruise ship that has been quarantined off the coast of Japan have tested positive for the new coronavirus.

“Princess Cruises can confirm that we have been notified that amongst the second set of samples that have completed testing, 10 additional people have tested positive for Coronavirus,” said a statement from the cruise company.

It says local public health authorities will be immediately disembarking those guests for transport to local hospitals.

“The health and safety of our guests and crew remains our top priority,” the company said. “We continue to work closely with the Japan Ministry of Health on all protocols and procedures while ensuring the comfort of our guests.”

The ship carrying 2,666 guests and 1,045 crew was quarantined in Yokohama following a confirmed outbreak of the new coronavirus on Tuesday.

The first phase of health screening of all guests and crew onboard Diamond Princess confirmed initial 10 cases of the virus. None of those were Canadian.

Later on Wednesday, health workers in the port city of Yokohama said 10 more people were confirmed sickened with the virus. They will be transferred to nearby hospitals for further testing and treatment, bringing the total caseload to 20.

The cruise line says the first 10 infected cases included two Australians, three Japanese, three people from Hong Kong, and one from the United States, as well as a Filipino crew member.

Foreign Affairs Minister Francois-Philippe Champagne says the Canadian mission in Tokyo has been in touch with the Canadian passengers on the ship to offer them consular assistance and the government will look to the cruise line to repatriate them when the quarantine is finished.

Covered from head-to-knee by large, white sheets, the positive cases were led by gloved and masked officials onto Coast Guard vessels, to be taken ashore and transported to local hospitals.

The ship will remain under quarantine for 14 days in Yokohama, Princess Cruises says.

The cruise line says it will continue to fully co-operate with and follow the instructions of global medical authorities and the Japanese government.

It says it will also be cancelling the next two Diamond Princess cruises departing Yokohama on Feb. 4 and 12.

Japan, which has reported 45 cases, stepped up quarantine measures after officials were criticized last week for allowing two evacuees from Wuhan to leave early from a hotel where they had been quarantined.

Starting Saturday, Japan banned the entry of foreigners who have visited Hubei province in the previous 14 days.

The viral outbreak that began in China has infected more than 24,500 people globally with 490 deaths reported in the Hubei province, the epicentre of the disease.

More than 1,800 people on another cruise ship were being screened in Hong Kong after three passengers on a previous voyage were diagnosed with the virus.