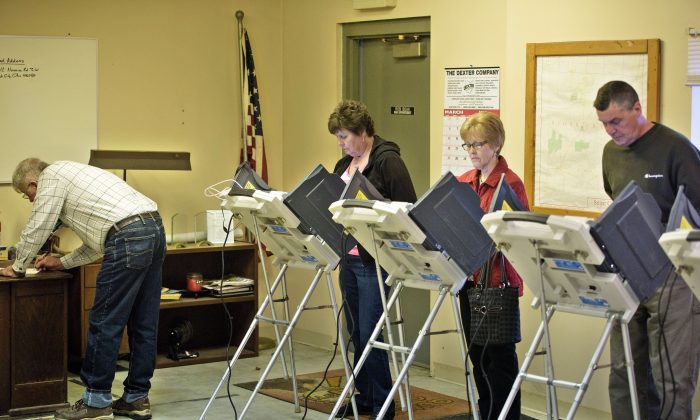 Voters use electronic machines to vote at a polling place during primary voting in Stark County in Beach City, Ohio, on March 15, 2016. (Brendan Smialowski/AFP/Getty Images)
2016 race

Two poll workers in Broward County, Florida, were fired on Election Day following a scuffle at a polling place.

NBC Miami reported that the two fired clerks worked at the Herb Skolknick Community Center in Pompano Beach after there were complaints about possible voter intimidation. Police responded to the call.

It led to a dispute between two clerks from precincts 23 and 24. One was a Republican and the other a Democrat.

As a result, the supervisor of elections fired both and told them to leave the polling place immediately. “[The poll watchers] had to be let go because they were interfering with the voting process,” Tonya Edwards, a spokesperson for the elections office, told the Sun-Sentinel. “And the clerks were not adhering to the procedures set forth by our office, so they had to be let go.”

Election Day: All Colorado Voting Systems Down for 30 Minutes, Now Back Up

A witness described what happened.

“There was some commotion. Some police came. (There was some) different talking going on about some argument inside. I didn’t really see anything. They came outside. They talked out here for a little bit and then they left,” voter Steven Labombard told Local10 News. “I figure everyone has an opinion, you know, and sometimes those opinions clash.”

The clerks were replaced by an assistant clerk, election officials said.

According to RealClearPolitics average as of Monday, Republican Donald Trump had 0.2 points on Democrat Hillary Clinton. It means that the the final result for Florida will likely come down to the very end.