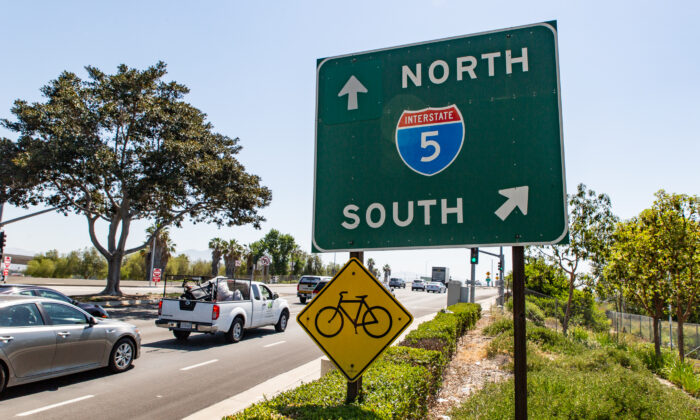 CARLSBAD, Calif.—Bags of cash fell out of an armored truck and burst open on Interstate 5 in northern San Diego County Nov. 19, sending currency blowing across the roadway and halting traffic in the area while authorities—and opportunistic commuters—collected the scattered money.

Two of those who allegedly helped themselves to some of the spilled greenbacks were taken into custody at the scene of the spectacular mishap, which happened about 9:15 a.m. on the northbound lanes of the freeway at Cannon Road in Carlsbad, according to the California Highway Patrol.

A witness’ cellphone video posted online by KUSI News showed people who apparently had jumped out of halted vehicles hurrying around, snatching the dumped cash off the pavement.

“This is the most insane thing I’ve ever seen,” marveled the young woman who shot the footage. “Someone dropped money all over the freeway.”

The alleged thievery of the two initial arrestees—a man and woman whose names were not immediately available—came to light after they accidentally locked themselves out of their car, leaving it blocking a lane on the interstate, CHP Sgt. Curtis Martin said.

How the sacks of currency of various denominations wound up tumbling out of a side door on the armored car was not immediately clear, though no collisions apparently were involved in the non-injury accident, the CHP reported.

All traffic lanes were open in the area again as of shortly before 11 a.m.

Highway Patrol officials warned those who sought to profit from the sudden presence of cash strewn all around them that they were likely to be identified via the ample video images recorded by bystanders and would be in line for theft charges if they tried to keep the illicit windfall.

“Its better for them to do the honesty policy than to wait for us to track them down and knock on their door,” Martin said.

Anyone else who pocketed some of the cash was urged to turn the money in at the CHP’s northern San Diego-area station at 435 La Tortuga Drive in Vista.