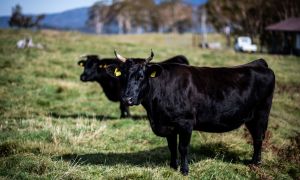 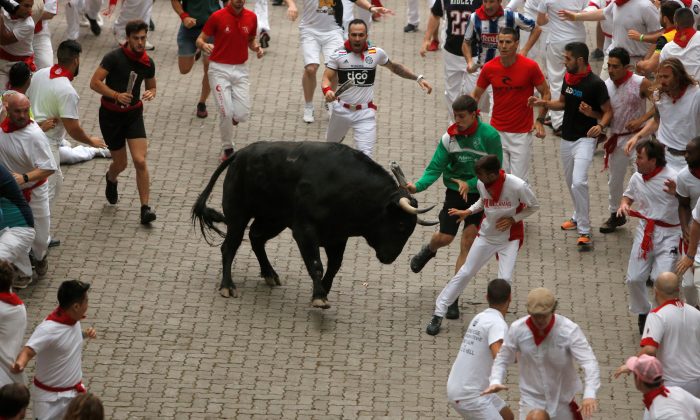 Revellers attempt to dodge a bull during the first running of the bulls at the San Fermin festival in Pamplona, Spain, July 7, 2019. (Jon Nazca/Reuters)
Europe

Two Americans Gored While Running With Bulls at Spanish Festival

Two Americans gored by bulls were among more than 50 people injured at the opening of the San Fermin festival in the Spanish city of Pamplona, officials said.

Spanish officials cited by The Daily Mail said one of the victims is a 23-year-old American who is in “serious” condition after his left leg was gored.

The second American to be gored is a 46-year-old Californian, who suffered a superficial injury to the neck.

Red Cross officials cited by Reuters said that on July 6, a total of three people were gored and two others suffered head trauma. In all, 53 people have been treated by the Red Cross in what is Spain’s best-known bull-running festival.

Each year, thousands of runners take part in the controversial event, running a half-mile course through the streets of Pamplona. Following the run, the animals are kept in the bullring until the afternoon’s fights.

Locals and tourists alike take part in the event, officially called The Running of the Bulls, which involves running from six fighting bulls accompanied by six tamed bell-oxen that lead the bulls. Participants will join in the 8 a.m. run every morning until July 14.

According to the event’s website, “the run should just take between 2 to 3 minutes to complete, unless something adverse occurs.” Participants often are injured—and sometimes killed—at bull-runs in Spain, but no one has died at Pamplona’s San Fermin festival since 2009, when a Spanish man named Daniel Jimeno was gored in the neck.

“Running with the bulls has its risks,” event organizers warn, saying that while deaths are rare, “the bulls could gore you or knock you over or trample you with their hooves.”

The festival also regularly stokes debate about the treatment of animals. Reuters reported that on July 5, protesters lay half-naked on the street with fake spears coming out of their backs to protest against what they see as animal cruelty.

Proponents of bullfighting, meanwhile, contend it’s a cultural event that should be preserved.

The gorings at Pamplona recall the case of an assistant at a bullfighting ring who was killed by a bull in a freak accident.

The assistant, identified by local media as Santiago Domínguez Rodríguez, was killed when a bull wheeled around after being released into the arena, and charged back into the pen where the 60-year-old was operating the gate.

The shocking moment at the Benavente bullring in Zamora, Spain, was caught on video on June 16 and posted to social media by some spectators.

The volunteer, known as a “torilero”—whose job is to goad the bull into the arena, distribute the spears, and operate the gate—was thrown into the air by the bull just seconds after releasing it to the ring, according to local reports.

The 2,000 spectators watched in horror as the first bull of the competition ran straight back into the narrow corridor behind the gate where the bulls are released, trapping Domínguez Rodríguez and goring him in the neck.

Medics rushed to help but could do nothing to save him from his catastrophic injuries, according to local media La Opinion De Zamora.

Flags will be flown at half-staff in the town, and black banners hung in the town halls, in honor of the decades-long service of the torilero, La Opinion reported.

On May 1, a teenager died after being gored by a bull during a spring festival in Spain.

Fran Gonzalez, 19, was gored in the groin by a bull and lost consciousness at the scene, before being taken to hospital where he was pronounced dead.

Gonzalez was a regular participant in a non-violent style of bullfighting exhibitions, sometimes described as “bull leaping,” Levante reported.

According to El Espanol, the bull gored Gonzalez moments after it was released from its pen, as it leaped violently and aggressively into the arena, “looking for trouble.”

Gonzalez had earned a reputation locally as a recortador, a type of bullfighter who, unlike the matador, takes on the bull sans cape or weapon in a show of athleticism and bravado.

Recortadors compete to earn points for daring and skill as they perform acrobatic moves to dodge the charging animal, which is allowed to return to the pen unharmed.

A few days later, on May 3, a female bullfighter was gored in the face by a half-ton bull that ignored the distraction of her swirling cape and charged directly into her as she knelt on the ground in an arena in Mexico.

Hilda Tenorio, 32—a pioneer of female bullfighting—survived, but was left with a broken and punctured upper palate and fractured cheekbones.