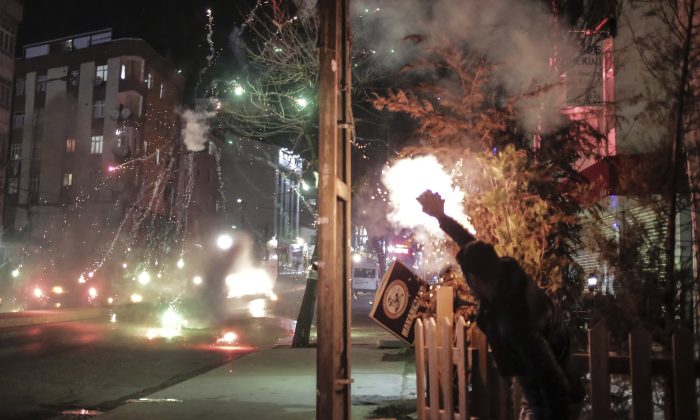 A protester launches firecrackers against a Turkish police water cannon during clashes in Istanbul on Feb. 14, 2016, between police forces and people protesting against security operations against Kurdish rebels in southeastern Turkey. Turkey imposed curfews in mainly Kurdish towns and districts in December while its security forces battled militants linked to the Kurdistan Workers' Party, or PKK, who set up barricades, dug trenches and primed explosives in the areas they have declared to be under Kurdish self-rule. (AP Photo/Cagdas Erdogan)
Middle East

ANKARA, Turkey—The White House says two Americans were among those killed in a suicide attack in Istanbul. Their identities were not released, but an Israeli diplomat in Istanbul says they held dual Israeli citizenship.

Israeli media named one of the victims as 60-year-old Simha Dimri, a mother of four. Her husband was wounded in the attack, according to reports.

Ned Price, a spokesman for the National Security Council, in a statement Saturday condemned the “heinous attack” and said the U.S. remains steadfast in support of Turkey, its NATO ally.

He says the U.S. remains in close touch with Turkish authorities. He offered thoughts and prayers to the families of those who were killed or wounded.

Price says these repeated acts of terrorism in Turkey must come to an end.

An Iranian citizen was also killed in Saturday’s attack on Istanbul’s main pedestrian shopping street that killed at least five people, including the suicide bomber.

It was the sixth suicide bombing in Turkey in the past year.