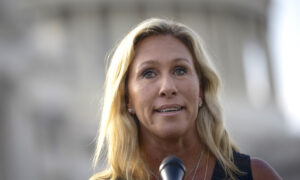 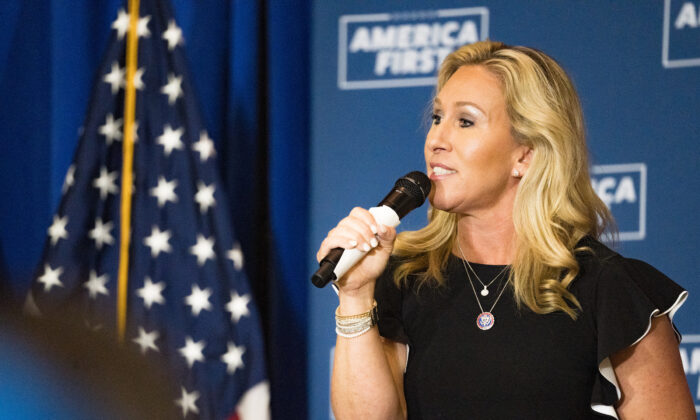 On Monday night, Greene alleged in her post that “the [the Food and Drug Administration (FDA)] should not approve the COVID vaccines.”

Greene said there are many reports of infection among vaccinated people, so these vaccines are “failing” and do not reduce the spread of the CCP (Chinese Communist Party) Virus, also known as novel coronavirus.

The FDA should not approve the covid vaccines.

There are too many reports of infection & spread of #COVID19 among vaccinated people.

These vaccines are failing & do not reduce the spread of the virus & neither do masks.

“I have vaccinated family who are sick with COVID. Studies and news reports show vaccinated people are still getting COVID and spreading COVID,” Greene wrote in a statement released on Telegram, another social media provider.

Greene said that she had talked with many people who have serious side effects like Myocarditis, blood clots, and miscarriages. She also mentioned the nearly 7,000 deaths following vaccination in the Vaccine Adverse Event Reporting System (VAERS).

The Centers for Disease Control and Prevention (CDC) has stressed that a report to VAERS does not mean that a vaccine caused an adverse event. A CDC report released Tuesday also alleged that the benefit of the COVID vaccines outweighs the risks of serious side effects which it said are “rare.”

“In my opinion, the FDA should not approve these vaccines until more research is done,” Greene said.

Currently, the three COVID-19 vaccines in America—Pfizer, Moderna, and Johnson & Johnson—are all under Emergency Use Authorization.

FDA has suggested that it has accelerated its reviewing process to get COVID-19 vaccines fully approved “as rapidly as possible.”

President Joe Biden said last month that he estimated the full approval of the vaccines would be announced “maybe in the beginning of the school year, at the end of August, beginning of September, October, they’ll get final approval.”

“Why does Dr. Fauci only harshly criticize bikers at Sturgis riding in [the] open air with no masks, but is silent on Obama’s ‘sophisticated’ birthday party super spreader event for Hollywood and Democrat elites?” Greene asked in her statement.

Former President Barack Obama held his 60th birthday party last week. Photos that surfaced afterward show that Obama and his guests were not wearing masks at the event.

“Why is it ‘right and moral’ to allow tens of thousands of COVID positive illegal aliens into our country and fly them into every state on the taxpayers[‘] dime, yet force our children to mask up for school?”

“But if I dare says the truth, Twitter suspends me because the truth is so offensive to the fragile hypocrites all over Twitter!” Greene added.

Twitter suspended Greene for 12 hours last month for violating “COVID-19 misleading information policy.” At the time, one of Greene’s posts said the CCP virus is “not dangerous for non-obese people and those under 65” and shouldn’t be mandated on the military.

Greene was previously suspended from Twitter in April. The company later lifted the suspension, saying that it was a mistake.