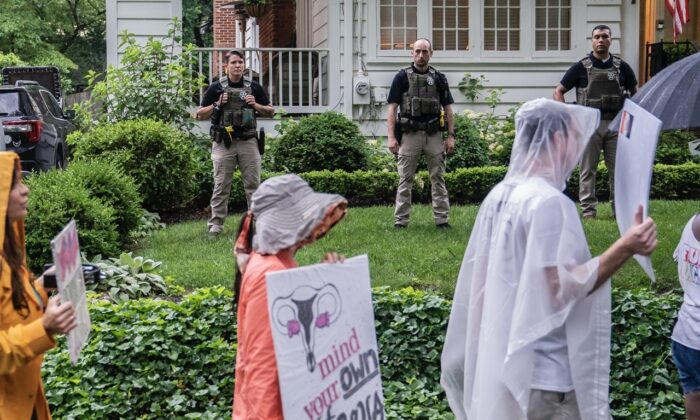 After two months of protests outside the homes of conservative justices, Twitter suspended on Thursday the activist group that had leaked their residential addresses.

Ruth Sent Us, a pro-abortion group named after the late liberal Justice Ruth Bader Ginsburg, publicized in May a map containing the locations of the six GOP-appointed Supreme Court justice’s residences on its website, before inciting far-left activists to protest there. It was in the wake of a leaked draft majority opinion from the high court to overturn the landmark Roe v. Wade abortion decision, which had granted a federal right to abortion nationwide since 1973.

“Our 6-3 extremist Supreme Court routinely issues rulings that hurt women, racial minorities, LGBTQ+ and immigrant rights,” the group claimed online at the time. “We must rise up to force accountability using a diversity of tactics.”

Although Ruth Sent Us said it was “committed to non-violence,” many protesters yelled obscenities at justices and their families. The online publicity has already led to a would-be attacker being arrested for attempted murder near Kavanaugh’s house, who had brought a firearm and ammunition after finding the justice’s address online.

Ruth Sent Us then highlighted on Twitter the daily routine of justices on the morning of June 8, including Barrett’s church and the school her children attend.

“If you’re in the DC metro area, join us. Our protests at Barrett’s home moved the needle to this coverage,” the group said in a June post, which has since been deleted. “Falls Church is a People of Praise stronghold. She sends her seven kids to a People of Praise school that she sat on the Board of Directors for. She attends church DAILY,” the post reads.

The group had also pushed for protestors via Twitter to disrupt Catholic masses on Mother’s Day.

Twitter did not specify which post was the last straw that touched its red line, but such moves appeared to breach the platform’s official policy that prohibits doxxing.

Conservative critics have questioned the fair enforcement of Twitter’s policy of banning those who purportedly incite violence. Former President Donald Trump was permanently banned from the platform two days after the Jan. 6 Capitol breach for arguing the 2020 election was not legitimate.

When the Supreme Court handed down the reversal of Roe v. Wade at the end of June, Ruth Sent Us reposted a map on its website listing the justices’ home addresses, suggesting a new round of onsite demonstrations.

Although Facebook banned the group from its platform soon after the reversal, their new account still functioned as recently as this week.

“We’re starting fresh here, but we’re on week 10 of sustained protests at the Justices homes, and we’re growing and adapting. Please share widely!” the group stated via its new page on Monday.