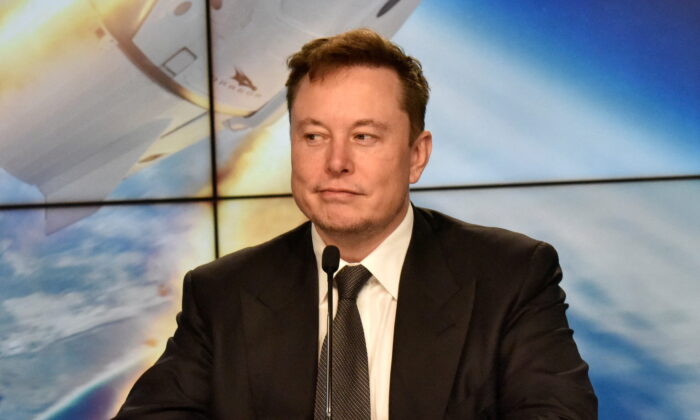 Rejecting the offer may hurt the stock price and disappoint investors, analyst warns
By Emel Akan

Tesla and SpaceX CEO Elon Musk made a bid on April 14 to take Twitter private for $54.20 per share, or around $43 billion in cash, after rejecting a proposal of a board seat.

Musk’s offer, which is 18 percent higher than the last closing price, is under consideration, the company’s board said.

Adam Candeub, a law professor at Michigan State University, said the forces of the status quo would try to figure out how to prevent the takeover. He was the acting chief of the National Telecommunications and Information Administration under President Donald Trump, and has long been critical of Section 230.

In a letter to Twitter Chairman Bret Taylor, Musk said the social media firm “needs to be transformed as a private company.”

“My offer is my best and final offer and if it is not accepted, I would need to reconsider my position as a shareholder,” Musk said, threatening that he may consider divesting his current stake in the company.

Ali Mogharabi, senior equity analyst at Morningstar, wrote in a note: “This could possibly drive the stock price down and disappoint Twitter shareholders.

“We believe the probability of Twitter accepting it is likely below 50%. However, we think the board may also be pondering whether it should discuss leadership changes, such as replacing CEO Parag Agrawal, with Musk as that may lessen the likelihood of Musk selling his shares if the bid is rejected.”

If Musk’s offer is turned down, Mogharabi said, he may still try to launch a similar social media site to rival Twitter.

Musk’s takeover bid came just over a week after announcing a 9.2 percent stake in the company that made him the social media company’s largest shareholder.

Twitter shareholders have a lot to think about, according to a senior executive at an investment management firm who asked to remain anonymous.

“You’re staring down the barrel of a bear market, recession, or worse. And someone comes along and gifts you 50 percent gain on your shares,” he said, asking, “What would you do?

“He’s already driven their share price higher by double digits since he announced his stake,” he added. “So, the major shareholders—not the back room digital monitors but the Blackrocks and Vanguards of the world—have a lot to ponder.”

The Vanguard Group, Morgan Stanley, BlackRock, and State Street are among the largest shareholders of Twitter.

If the board rejects the offer, the stock price might fall to $34 to $37 per share, according to Justin Post, a research analyst at Bank of America.

“Twitter stock is trading at $46 per share, which suggests to us that the Street sees a reasonable potential (greater than 40%) for the board to reject the offer and Mr. Musk to walk away,” he wrote in a report.

“We think that the board likely believes that Twitter has more than $54/share in value but also needs to evaluate carefully Twitter’s potential to reach its 2023 financial targets,” he said, adding that there would be additional scrutiny on hitting these targets if the board rejects the offer.

Speaking at the TED2022 conference on April 14 in Vancouver, Musk said he’s “not sure” if he will be able to acquire Twitter. When asked if he had a “Plan B” in case his offer is rejected, Musk replied, “There is.”

“My strong intuitive sense is that having a public platform that is maximally trusted and broadly inclusive is extremely important to the future of civilization,” he said. “I don’t care about the economics at all.”

Musk’s letter to Taylor makes it clear that he wants to shake up Twitter’s free speech policies.

“I invested in Twitter as I believe in its potential to be the platform for free speech around the globe, and I believe free speech is a societal imperative for a functioning democracy,” Musk wrote in the letter.

“However, since making my investment I now realize the company will neither thrive nor serve this societal imperative in its current form. Twitter needs to be transformed as a private company.

Before becoming a shareholder in the company, Musk accused Twitter of “failing to adhere to free speech principles” and stated that he is considering creating a new social media site.

Last month, Musk polled his 80 million Twitter followers, asking if the platform adhered to free speech values. He received 2 million votes, with more than 70 percent of those who responded voting no.

Twitter stated that the proposal will be reviewed by its board of directors, and that any response would be in the best interest of “all Twitter stockholders.”

Musk turned down a seat on Twitter’s board last week, which would have capped his ownership to a maximum of 14.9 percent of the firm’s shares.