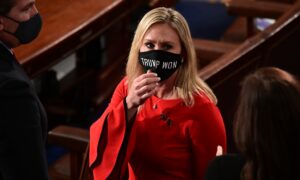 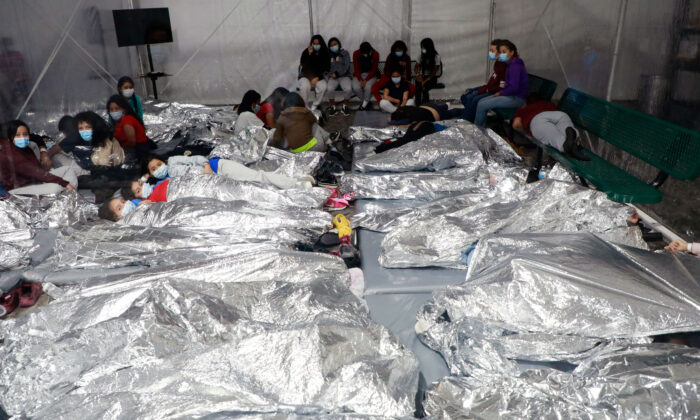 Unaccompanied minors sleep side by side on the floor at a temporary processing facility in Donna, Texas, on March 23, 2021. (CBP)
Social Media

Twitter acknowledged that it had “incorrectly” applied a warning on a post that showed photos of unaccompanied children huddled under emergency blankets in crowded “cells” at a Texas detention center.

“This warning was incorrectly applied by one of our automated tools and it has since been removed,” a Twitter spokesperson told The Epoch Times in an email statement. The post that is the subject of this dispute was authored by Project Veritas, an undercover journalism nonprofit.

Project Veritas founder James O’Keefe had posted a video that contained a compilation of photos that shed some light on the burgeoning crisis at the U.S. southern border. The photos, which O’Keefe said were obtained from a Donna immigration detention center in Texas, show children sleeping on what appears to be four-inch-thick mattresses, although some children appear to be sleeping on the floor.

Following its release, Twitter had placed the video behind a filter and claimed that the content was “potentially sensitive.”

In response to Twitter’s statement, O’Keefe questioned the efficacy of the “automated tool” that the platform employs.

“What AUTOMATED TOOL could that be? @jack Is that the ‘Censor the truth’ tool?” he wrote.

This is the latest in the ongoing public feud between big tech companies and conservatives. Multiple Silicon Valley companies such as Twitter and Facebook have drawn intense scrutiny over their increased policing of user speech, in particular, during the lead up to the Nov. 3 election and after the Jan. 6 breach of the U.S. Capitol. The social media companies’ moderation saw former President Donald Trump’s account permanently suspended on Twitter and indefinitely banned on Facebook and Instagram.

The companies are accused of unbalanced moderation of content that conservatives say largely targets them and supporters of Trump.

This is not the first time Twitter has taken action against Project Veritas. In February, the company suspended the accounts of Project Veritas and O’Keefe after the group posted a video of one of its reporters asking Facebook’s Vice President of Integrity, Guy Rosen, for a comment in front of his residence.

O’Keefe in a statement to The Epoch Times at the time denied the allegations, saying that his group had not violated Twitter’s private information policy.

“Twitter invited Project Veritas to, and we did, appeal that decision with Twitter. In an apparent act of retaliation for daring to question their authority, Twitter responded to our appeal by suspending our account, continuing to tell us that Project Veritas could delete the tweet and have our account reinstated,” he said.

The company had previously come into the spotlight for suppressing a series of exposés by the New York Post about the alleged business dealings of Hunter Biden, son of President Joe Biden, in China. The Trump administration took issue with the conduct and escalated its push on Congress to amend Section 230 of the Communications Decency Act.

“The events of recent days have made reform even more urgent,” then-Assistant Attorney General Stephen E. Boyd wrote in the letter (pdf) at the time. “Today’s large online platforms hold tremendous power over the information and views available to the American people. It is therefore critical that they be honest and transparent with users about how they use that power. And when they are not, it is critical that they can be held accountable.”