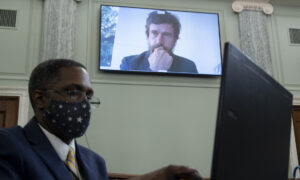 A Twitter app icon on a cellphone in a file photo. (Matt Rourke/AP Photo)
2020 Election

Twitter on Nov. 2 said it will put warning labels on posts from candidates who declare victory before projections from approved organizations or state elections officials.

“People on Twitter, including candidates for office, may not claim an election win before it is authoritatively called,” two executives at the social media company wrote in a blog post.

“To determine the results of an election in the US, we require either an announcement from state election officials, or a public projection from at least two authoritative, national news outlets that make independent election calls. Tweets which include premature claims will be labeled and direct people to our official US election page,” Vijaya Gadde and Kayvon Beykpour wrote.

More specifically, users who try to share tweets deemed misleading by Twitter overseers will see a prompt pointing them to contextual information before they’re allowed to post the tweets.

Twitter typically gives users two options in spreading posts from others: retweeting, or sharing a post; or quote tweeting, a term that refers to sharing a post while adding commentary.

Users will not be able to quote tweet posts from U.S. political figures, U.S.-based accounts with more than 100,000 followers, or smaller accounts that send out tweets that gain significant engagement that Twitter determines include misleading information.

Those tweets will only be accessible by clicking through a warning.

Replies, or comments, will also not be allowed, and the tweets won’t be part of recommended posts and topics that Twitter posts on its sidebar.

“We expect this will further reduce the visibility of misleading information, and will encourage people to reconsider if they want to amplify these Tweets,” Gadde and Beykpour wrote.

The policy change is part of a range of “significant product and enforcement updates that will increase context and encourage more thoughtful consideration before Tweets are amplified,” they added.

President Donald Trump on Nov. 1 said he wouldn’t prematurely declare victory. Both he and Democratic presidential nominee Joe Biden have held out the possibility of declaring victory on election night.

Twitter also revealed which organizations the company is relying on as official sources for election results, besides state election officials.

At least five of the news organizations are widely considered left-leaning or liberal.

The growing rush to manipulate posts on its platform, and similar efforts by Facebook and other social media companies, has drawn increased attention from lawmakers and President Donald Trump, who are angling to make changes to Section 230 of the Communications and Decency Act.

The section shields technology companies from liability for content posted on their platforms while letting them moderate it, but critics say the law needs to be altered because the companies typically target Republicans with labels and censorship.

“This liability shield has been pivotal in protecting online platforms from endless and potentially ruinous lawsuits. But it has also given these internet platforms the ability to control, stifle and even censor content in whatever manner meets their respective standards,” Senate Commerce Chairman Roger Wicker (R-Miss.) said during an Oct. 28 hearing in Washington.

Executives pushed back on the criticism during the hearing.

“Removing Section 230 will remove speech from the internet.”

Dorsey suggested expanding the law to require publication of moderation processes, among other ideas.