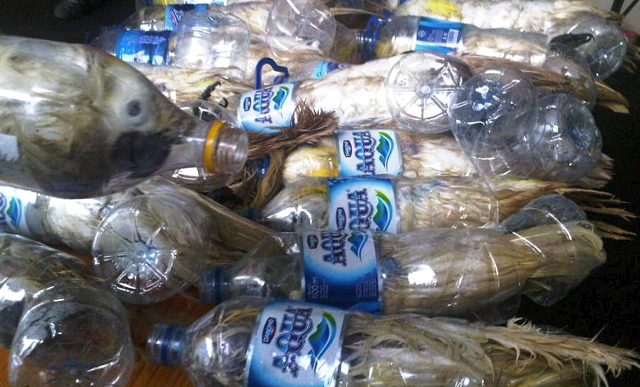 Days after police at a port in the Indonesian city of Surabaya arrested a passenger with 24 rare birds stuffed in plastic water bottles, a public outcry has prompted the government to set up shelters to accommodate people who wish to return more of the creatures, which have up to now been highly sought after by collectors and breeders.

Eleven of the seized birds, all but one of which were critically endangered yellow-crested cockatoos, have perished. The rest have been entrusted to a conservation center in Lamongan, East Java, where they will be nursed back to health for eventual release into the wild.

In the wake of the scandal, the country’s Environment and Forestry Ministry has received a deluge of reports from citizens wanting to surrender their cockatoos into the hands of the state.

News portal Detik.com has collected dozens of articles about such people, on the strength of a campaign for readers to write in with stories about themselves and their birds.

Wahono, a Jakarta resident, turned over a cockatoo his son had picked up in Papua and given him as a gift in 2000.

Johanes Taryono, a retired air force officer, said he would free his cockatoo, Yakob, after 40 years together.

Various hashtags related to the cause – #SaveJambulKuning and #KakatuaBotol among them – are trending on Twitter, and a Change.org petition calling on legislators to revise an outdated conservation law has received 18,820 signatures and rapidly counting.

“With a public response like that, I think the government has to act,” said the minister, Siti Nurabaya. “That’s why we activated three command posts to receive yellow-crested cockatoos.”

“Later they will be released into their natural habitats, mostly in Maluku,” she added.

One report quoted the minister as saying the birds would be released in Mount Gede Pangrango National Park on Indonesia’s main island of Java, rather than in their natural habitat in eastern Indonesia.

Whatever the case, the incident might prove a catalyst for regulatory change. Siti said her ministry was studying the possibility of strengthening penalties for wildlife traffickers.

“In 10 years, we’ve handled 39 cases of bird smuggling, and there’s been five convictions, with another still at trial,” she said. “The average sentence is no more than eight months behind bars. It’s very light.”

Wahono, the Jakarta resident, said he hoped the movement lasted more than a moment.

“Protected animals should be protected,” he said.

This article was written by Sapariah Saturi and Indra Nugraha, contributing writers for news.mongabay.com. This article was republished with permission, original article here.