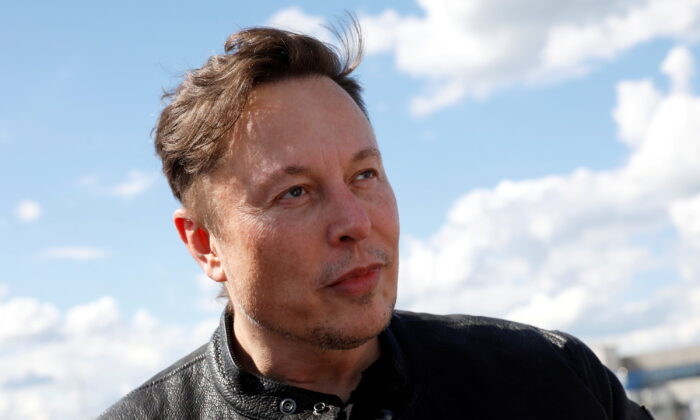 SpaceX founder and Tesla CEO Elon Musk looks on as he visits the construction site of Tesla's gigafactory in Gruenheide, near Berlin, Germany, May 17, 2021. (Michele Tantussi/Reuters)
Media & Big Tech

Twitter is reportedly considering a so-called “poison pill” tactic to thwart Elon Musk’s effort to buy out the social media platform, prompting a critical response from the Tesla chief.

Cameron Winklevoss, founder of the Gemini cryptocurrency exchange, said in a tweet that “Twitter is considering a poison pill to thwart @elonmusk’s offer,” while two anonymous sources told The New York Times that Twitter’s board is mulling the tactic, which is used to block hostile takeovers.

The poison pill method gives existing shareholders the right to buy additional shares at a discount, diluting outstanding stock and making a hostile takeover more financially challenging for the acquirer.

The Epoch Times has reached out to Twitter for comment but no response was received by the company.

‘Orwellian Control of The Narratives’

Winklevoss alleged in his tweet that, by adopting the poison pill tactic, Twitter was demonstrating its commitment to preserving the status quo even if it has a negative impact on existing shareholders.

“They would rather self-immolate than give up their censorship programs. This shows you how deeply committed they are to Orwellian control of the narratives and global discourse. Scary,” he wrote.

Twitter has been accused of suppressing some minority and politically conservative viewpoints, allegations the company has repeatedly denied.

Musk responded to Winklevoss’s tweet, saying that if Twitter’s actions run afoul of shareholders’ interests, they could be exposing themselves to legal action.

“If the current Twitter board takes actions contrary to shareholder interests, they would be breaching their fiduciary duty,” Musk wrote. “The liability they would thereby assume would be titanic in scale.”

‘My Best and Final Offer’

Musk, who has a 9.2 percent stake in Twitter, made headlines on Thursday by launching a bid to buy all of Twitter’s outstanding shares in cash at a significant premium over market price.

“My offer is my best and final offer and if it is not accepted, I would need to reconsider my position as a shareholder,” he added.

Adam Candeub, a law professor at Michigan State University, told The Epoch Times that Twitter’s board could face legal consequences if they turn down an offer that’s financially lucrative to shareholders.

“I don’t believe that the proposed offer by @elonmusk ($54.20) comes close to the intrinsic value of @Twitter given its growth prospects,” said Al Waleed in a tweet. “Being one of the largest & long-term shareholders of Twitter @Kingdom_KHC & I reject this offer.”

Musk responded by suggesting the rejection was politically motivated.

“Interesting. Just two questions, if I may,” Musk wrote in response. “How much of Twitter does the Kingdom own, directly & indirectly? What are the Kingdom’s views on journalistic freedom of speech?”

Musk, who has repeatedly questioned Twitter’s commitment to free speech, said in his buyout proposal that he wants to transform the company into a true platform for free speech.

“Twitter has extraordinary potential. I will unlock it,” Musk wrote in a letter to Twitter Chairman Bret Taylor, attached as an exhibit to a filing with the Securities and Exchange Commission (SEC) on April 14 (pdf).

After Musk’s earlier purchase of a stake that made him Twitter’s biggest individual shareholder, he was offered a seat on the company’s board of directors, which he initially appeared to accept but later turned down.

Declining the board seat fueled speculation about whether Musk had plans to launch a hostile takeover of Twitter.

“I invested in Twitter as I believe in its potential to be the platform for free speech around the globe, and I believe free speech is a societal imperative for a functioning democracy,” Musk wrote in the letter to Taylor.

“Since making my investment I now realize the company will neither thrive nor serve this societal imperative in its current form. Twitter needs to be transformed as a private company,” Musk continued, referring to the “societal imperative” of free speech.

Musk elaborated on this theme in an interview at the TED Conference in Vancouver on Thursday, saying that he wants to take Twitter private and transform it into an open-source platform and an “inclusive arena for free speech.”

“Twitter has become kind of the de facto town square, so it’s just really important that people have both the reality and the perception that they are able to speak freely within the bounds of the law,” Musk said during the event.

While he didn’t provide details about how he thinks Twitter restricts free speech, he did say that Twitter should be less eager to permanently ban problematic users from the platform, suggesting temporary “timeouts” instead.