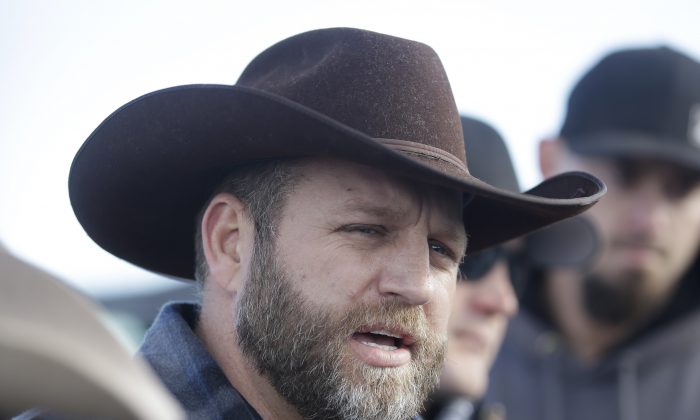 Ammon Bundy, one of the sons of Nevada rancher Cliven Bundy, speaks to reporters during a news conference at Malheur National Wildlife Refuge on Wednesday, Jan. 6, 2016, near Burns, Ore. With the takeover entering its fourth day Wednesday, authorities had not removed the group of roughly 20 people from the Malheur National Wildlife Refuge in eastern Oregon's high desert country. (AP Photo/Rick Bowmer)
Social Media

Twitter and liberal news outlets exploded after Ammon Bundy, the leader of the armed group in Oregon, compared himself to Rosa Parks.

But people had to backtrack after it was revealed as a hoax.

The tweet came from an account that appeared to be Bundy, but on closer look it’s pretty obvious it’s fake. For one thing, the account is brand new, started on Jan. 3, with only a few thousand followers. For comparison, Bundy has used Facebook for more than a year and has many more followers.

Tony Dokoupil, a MSNBC reporter on the ground at the Malheur National Wildlife Refuge, confirmed that the account is fake.

“I stood with him last night as tweets supposedly went out from him,” Dokoupil said. Bundy’s wife also emphasized that the account is fake.

The hoax account’s post that stirred people up was: “We are doing the same thing as Rosa Parks did. We are standing up against bad laws which dehumanize us and destroy our freedom.”

Many outlets were fooled, including CBS, the Washington Post, USA Today, and the New York Daily News.

Most outlets have updated their stories, but people are still circulating the fake quote online and slamming Bundy.

When you fool the entire world with a parody acct. pic.twitter.com/cPiy2UBqUP

Twitter user TheSaintNegro29 later claimed responsibility for the hoax, mocking the “mainstream media” who fell for it.

The account gloated that it had fooled many outlets, posting screenshots of reporters asking him questions over direct messages and email.

“It was good to rip on Shaun King,” he added, referring to a Daily News writer that fell for the hoax.