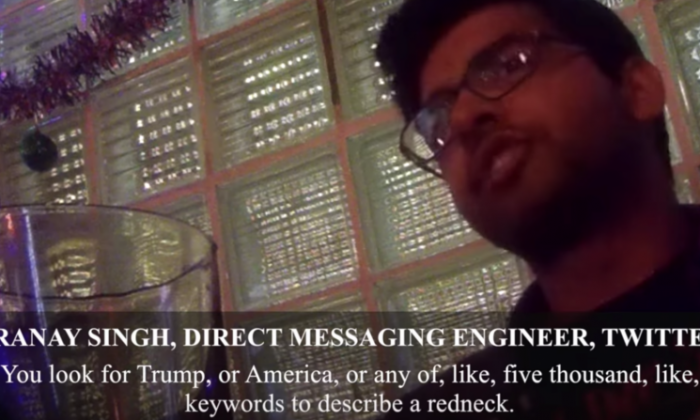 (Screenshot via Project Veritas/YouTube)
US News

Hidden-camera interviews with eight current and former employees reveal that Twitter is using an array of tools to identify users with conservative, pro-Trump, pro-America, or even pro-God views, and target them for censorship.

“You look for Trump, or America, or any of like, five thousand, like, keywords to describe a redneck,” said Pranay Singh, a direct messaging engineer at Twitter, who was discussing the censorship program.

Mo Norai, a former Twitter content review agent told an undercover reporter on May 16, 2017, that “if they said this is ‘Pro-Trump,’ I don’t want it because it offends me,” that he will be able to manually ban accounts, and noted in the interview that conservatives are especially targeted.

The undercover investigation also revealed that Twitter may be using a controversial method called “shadow banning” to silence some voices.

“One strategy is to shadow ban so you have ultimate control,” Abhinav Vadrevu, a former Twitter software engineer told an undercover reporter. “The idea of a shadow ban is that you ban someone but they don’t know they’ve been banned because they keep posting and no one sees their content. So they just think that no one is engaging with their content when in reality, no one is seeing it.”

The social media platform, which advertises itself as the “global town square,” also appears to “downrank” users, particularly conservatives, based on their views. When asked what Twitter is doing to make popular conservative users not show up in people’s Twitter feeds, Olinda Hassan, a policy manager for Twitter’s trust and safety team, told an undercover reporter that the company is working on creating a “downranking” system.

The latest revelations are of particular concern because it appears that decisions to censor individual users are made manually by Twitter employees.

According to Norai, the employees at Twitter were “probably about 90% Anti-Trump, maybe 99% Anti-Trump,” at the time when he worked there. Based on that statement, Twitter’s censorship appears to be skewed largely against conservatives. Such bias isn’t part of Twitter’s public policies, but Norai was filmed telling undercover reporters for Project Veritas that many such policies do exist behind closed doors.

Norai said some rules for censoring conservatives are not publicly stated. “A lot of unwritten rules, and being that we’re in San Francisco, we’re in California, very liberal, a very blue state,” Norai said. “You had to be… I mean as a company you can’t really say it because it would make you look bad, but behind closed doors are lots of rules.”

The report follows an earlier Project Veritas investigation where a senior network security engineer admitted that he’s “more than happy to help the Department of Justice with their little [President Donald Trump] investigation.”

Twitter responded to both reports denying that they practice shadow banning.

“Twitter does not shadowban accounts,” Twitter said in a statement. “We do take actions to downrank accounts that are abusive, and mark them accordingly so people can still to click through and see these Tweets if they so choose.”

“We deplore the deceptive and underhanded tactics by which this footage was obtained and selectively edited to fit a pre-determined narrative,” the company said in a statement to Fox News. “Twitter is committed to enforcing our rules without bias and empowering every voice on our platform, in accordance with the Twitter Rules.”