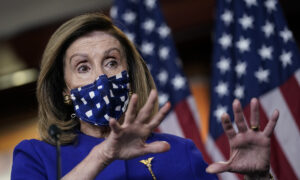 On April 5 the Tweet had been replaced by a “Tweet withheld” error message which says: “This Tweet from @realDonaldTrump has been withheld in response to a report from the copyright holder.”

“Mass Effect 2,” an action role-playing game developed by BioWare and published by Electronic Arts (EA), is set in a distant and violent science fiction future.

“Trump Effect” closely copies the “Mass Effect 2” launch trailer—viewable at the bottom of this article—even borrowing Martin Sheen’s voice-over portrayal of the Illusive Man. In the Mass Effect universe, the Illusive Man is a secretive leader of a paramilitary organization.

Since its upload, the parody video has garnered upwards of 130,000 views on vid.me alone. It is possible that EA submitted a complaint to Twitter regarding the possible illegal use of their copyrighted material—in fact it is more than likely, since a YouTube version of the video has also been removed due to “a copyright claim by EA.”

It is up for debate whether the video was made by a Trump supporter or a Trump detractor.