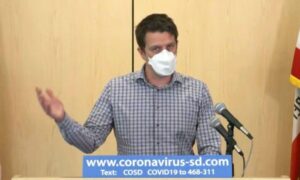 The logo of Twitter is displayed on the screen of a smartphone and a tablet in Toulouse, France, on Oct. 26, 2020. (Lionel Bonaventure/AFP via Getty Images)
Censorship & Socialism

A conservative influencer filed a lawsuit against Twitter, a former California secretary of state, and others on June 17, alleging that they colluded to censor election-related content, violating the plaintiff’s rights to free speech, equal protection, and due process.

The lawsuit (pdf) cites emails and documents from California’s Office of Elections Cybersecurity, which show that state employees flagged Twitter posts because they purportedly contained misinformation. Twitter subsequently removed many of the flagged posts, including those written by attorney Rogan O’Handley, the plaintiff.

Twitter went on to permanently suspend O’Handley for a post that said “most votes in American history,” alongside a photo of the U.S. Capitol surrounded by barbed wire in the wake of the Jan. 6 breach.

“The actions of then-California Secretary of State Alex Padilla, his agents, and Twitter are outrageous. Government cannot censor speech on the basis of viewpoint, but that is exactly what happened here,” the Center for American Liberty, which is representing O’Handley, said in a statement.

“Whether it is for Rogan O’Handley or for any other American, the First Amendment must be protected. Political speech—the right to express ideas and engage in the political process—is core to the First Amendment; it is sacrosanct,” the center stated. “If we are ever going to have free and fair elections again, we have to stop Big Tech collusion with Big Government to censor your speech.”

The lawsuit cites a spreadsheet and hundreds of pages of emails (pdf) obtained earlier this year by conservative watchdog group Judicial Watch. The documents reveal the communications between Twitter and the Office of Elections Cybersecurity.

“These documents blow up the big lie that Big Tech censorship is ‘private’—as the documents show collusion between a whole group of government officials in multiple states to suppress speech about election controversies,” Judicial Watch President Tom Fitton told Fox Business in March.

Twitter permanently suspended a large number of accounts before and after the 2020 election, including that of former President Donald Trump.