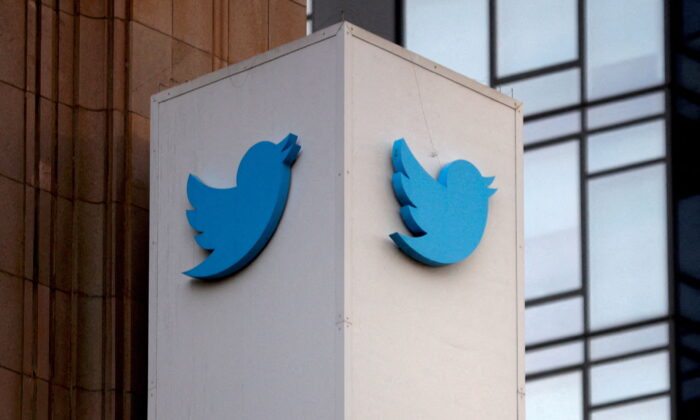 A Twitter logo is seen outside the company headquarters in San Francisco, Calif., on Jan. 11, 2021. (Stephen Lam/Reuters)
Media & Big Tech

Twitter is prohibiting advertisers from running ads that “contradict the scientific consensus on climate change,” the company announced on April 22.

“We believe that climate denialism shouldn’t be monetized on Twitter, and that misrepresentative ads shouldn’t detract from important conversations about the climate crisis,” Sean Boyle, Twitter’s director of sustainability, and Casey Junod, the company’s global sustainability manager, said.

The new approach was said to be informed by “authoritative sources.” The only source cited was the Intergovernmental Panel on Climate Change (IPCC), a United Nations body.

The announcement was made on Earth Day, a holiday aimed at promoting awareness of the environment.

Climate change refers to the shift in temperatures and other changes in weather over time. According to the IPCC, global temperatures rose about 1.98 degrees Fahrenheit from 1901 to 2020.

Scientists and others who have studied the climate diverge over how much of an impact humans have had on the changing climate.

Twitter’s new policy drew support from some, and criticism from others.

The Union of Concerned Scientists, for instance, called the move “good news.”

Ryan Maue, a meteorologist, though, in a nod to how many predictions of climate change have been wrong, wondered whether “‘doomerism’ or apocalyptic info” would also be banned.

Google and Pinterest previously imposed bans on certain content, including posts that refer to climate change as a hoax or a scam.

Twitter’s new policy comes as it tries to fend off a takeover bid from Tesla CEO Elon Musk, who has said his goal in buying the company and taking it private is to fulfill its potential “to be the platform for free speech around the globe.”

“Twitter has extraordinary potential. I will unlock it,” he said at the time.

Musk has not commented yet on the climate change policy.

Twitter, launched in 2006, originally performed only light moderation of posts, but has increasingly censored content and ads concerning a variety of topics, including President Joe Biden’s son Hunter Biden, election irregularities, and biology.