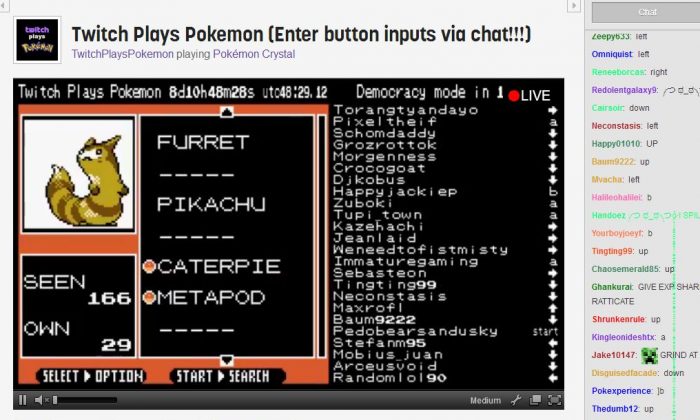 Twitch Plays Pokemon Keeps Going Strong: Reddit Seeks to ‘Be the Best There Ever Was’

Twitch Plays Pokemon–which is attempting to beat Pokemon Crystal with tens of thousands of people playing at the same time–keeps going.

As of Monday, about 17,000 people were viewing the chaotic gameplay of Pokemon Crystal, about a week after Pokemon Red was completed.

More than 1.1 million people participated, around 122 million commands were sent out, 9 million people watched and didn’t take part in the action, around 36 million views were generated, around 1 billion minutes were spent watching the game, and 121,000 players were involved at the same time at one point.

As of Monday, the Twitch players have managed to get eight badges on Indigo Plateau in Pokemon Crystal. The character was named “AJDNNW.”

Only around four Pokemon have been released from the PC box–including a Wooper, a Drowzee, a Sentret, and a Togepi.

On the project’s Reddit page, the most recent goals were to “kick Silver’s [expletive] in a rematch,” “Grind up some levels for our ‘mons,” “Evolve KT (Dratini) & Dr Hoots (Hoothoot),” “Take on the Elite 4 (multiple times),” and “Be the best there ever was.”

There’s also a Twitch Plays Pokemon Yellow, which has similar “gameplay” but isn’t nearly as popular.

The channel gives an explanation on how to play: “TwitchPlaysPokemon now has two modes for determining the input to make in the game, they are called anarchy mode and democracy mode.”

“Anarchy mode is the ‘classic’ mode, where everyone’s inputs are applied immediately. Democracy mode chooses the most popular input provided during a 30 second voting period,” it says.

And while it might seem like “Democracy” is the best option, it’s not, according to Reddit’s Google Document.

“Democracy is good for navigating tricky or dangerous areas or interfaces such as the PC, but it suffers from the effects of the stream lag. This can make it unintuitive and frustrating to use, since people’s current votes tend to take effect in the next voting round. If a significant portion of the voting population is unaware of this, it can make progressing difficult or even impossible. The solution to this is a general knowledge of the technique required to compensate for the stream lag,” it reads.