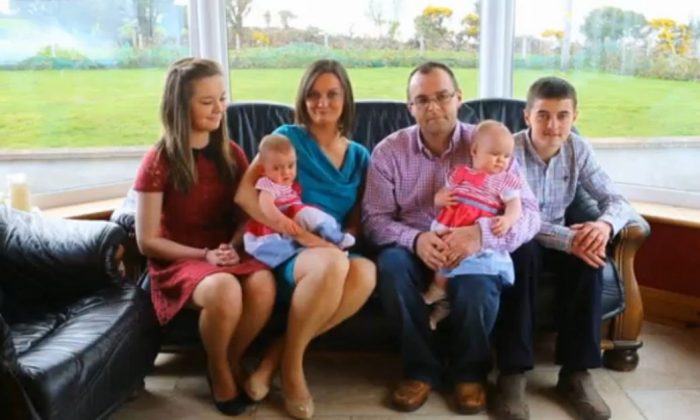 The family after the birth went through. (Screenshot/AOL)
Europe

Maria Jones-Elliot gave birth to Amy four months early, but the other twin Katie didn’t arrive until three months later. The births are up for a new Guinness World Record for the “longest interval between the birth of twins,” according to the Mirror.

“I call the girls our little miracles,” Jones-Elliot told the Mirror. “As I held Amy for the first time I stroked my bump and prayed to God. I just wanted my girls to be together and safe and well. Usually you experience nothing but joy at the birth of a new baby, but it was so achingly bitter-sweet as both of their lives hung in the balance.”

The reason for the delay was that instead of what usually happens during the birth of twins–the uterus contracts and expels both babies within an hour–Jones-Elliot’s uterus stopped contracting, so doctors left Katie “where she was and let nature take its course,” Dr. Eddie O’Donnell said.

“We took an educated decision here as both babies were so small but Katie had more of a fighting chance staying put,” said O’Donnell, who was in charge of the delivery team. “We are delighted for the whole family and couldn’t be happier we were able to play a part in their miraculous birth.”

The births happened at Waterford Regional Hospital in Ireland.