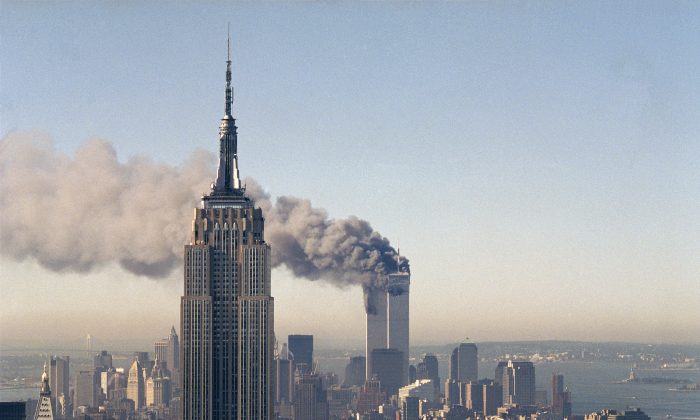 The collapse happened after two planes were flown into the World Trade Center towers in the morning.

The National Commission on Terrorist Attacks Upon the United States says that more than 2,600 people died at the World Trade Center, not including the hundreds on the planes. The New York City government says 2,750 people were killed in the attacks.

Another 125 people died at the Pentagon when a third airliner slammed into the western face.

The Centers for Disease Control said that of the people who died at the World Trade Center, about 2,000 were white, 215 were Black, 258 were Hispanic, and 176 were Asian or Pacific Islander.

People who died when the towers collapsed included people from a range of states and even from other countries. While about 1,700 were from New York City, 674 were from New Jersey. Others included Arizona, California, Florida, Maine, Massachusetts, and Missouri.

People who escaped the towers collapse are still dealing with the trauma.

Modesto Bee writer Claudia Newcorn described a friend who escaped but is still struggling over a decade later.

“My friend had worked in the World Trade Center for nearly 20 years. She had told me of the agony of hiking down 102 flights of stairs during the 1993 bombing in the below-ground parking garage when the elevators didn’t work. What I did not know was because of this, the company had relocated to the 40th floor after,” she wrote.

“Even 13 years later, she will not speak much of that day. She remembers the building suddenly shaking, swaying in what she would later learn was the plane’s impact. As they were ordered to evacuate, she encountered firefighters coming up the stairs. Her voice catches when she speaks of them, and of the friends she lost on the higher floors where no salvation waited.

“Of the bodies that she encountered as they exited the building and were ordered away from the area, she says nothing, her face paling. Instead, she talks of failed cellphones, enormous lines of people waiting at the few remaining pay phones, desperately trying to reassure loved ones. She speaks of walking up Sixth Avenue, trying to reach a subway station so she could escape home to New Jersey – and not being able to as the city shut down. She recalls the strange silence that cloaked the normally noisy city to be replaced by a horrified shrieks as people turned to see the towers collapse, taking lives, memories, everything.

“I was on the phone trying to reach her. Her cellphone was dead. Only many hours later would I learn she was safe.

“But for her, the emotional damage is permanent. Her company ordered all the employees back to makeshift offices the next day in uptown New York. Those who remained in the city struggled to comply. And while she worked for another year, she refused to go to the financial district, and finally retired to become a full-time mother, cherishing the time with her children in a way she could not appreciate before 9/11. Of those who died, her only quiet story, told once, was of a friend’s brother – they buried a finger, all that could be found of him.”

NEW YORK—With the solemn toll of a bell and a moment of silence, the nation paused Thursday to mark the 13th anniversary of the Sept. 11 attacks at the hallowed site just hours after President Barack Obama promised to root out and destroy a new group of terrorists threatening the U.S.

Family and friends of those who died read the names of the nearly 3,000 people killed in New York, at the Pentagon and near Shanksville, Pennsylvania. Thelma Stuart, whose husband, Walwyn Wellington Stuart Jr., 28, was a Port Authority Police Department officer, said the nation should pray for its leaders, “that God will grant them wisdom, knowledge and understanding on directing them on moving forward.”

In an address Wednesday, Obama authorized airstrikes inside Syria along with expanded strikes in Iraq as part of “a steady, relentless effort” to root out Islamic State extremists.

On Thursday, the president observed a moment of silence outside the White House with his wife Michelle, and Vice President Joe Biden before heading to the Pentagon’s 9/11 memorial.

Eileen Mora, 31, came to remember her cousin who died in the attack. She said at first she was angry about the timing of the president’s announcement.

“Do it three weeks ago or do it in three weeks,” she said. “We’re all walking out the door today with tragic and sad and scary memories on us … it’s an invitation to fight on a day where we lost.”

American flags are placed on inscribed names along the edge of the South Tower Memorial during memorial observances on the 13th anniversary of the Sept. 11 terror attacks on the World Trade Center in New York, Thursday, Sept. 11, 2014. Family and friends of those who died read the names of the nearly 3,000 people killed in New York, at the Pentagon and near Shanksville, Pennsylvania. (AP Photo/The New York Times, Chang W. Lee, Pool)

Joanne Barbara, whose husband of 30 years, Gerard Barbara, was a FDNY captain who died, urged all to feel for not only the lost but “those who continue to suffer from the aftermath.”

“May God bless America, and may we never, never forget,” she said.

Little about the annual ceremony at ground zero has changed. But so much around it has.

For the first time, the National Sept. 11 Memorial Museum — which includes gut-wrenching artifacts and graphic photos of the attacks — is open. Fences around the memorial plaza have come down, integrating the sacred site more fully with the streets of Manhattan.

A new mayor is in office, Bill de Blasio, one far less linked to the attacks and their aftermath than his immediate predecessors. And finally, a nearly completed One World Trade Center has risen 1,776 feet above ground zero and will be filled with office workers by this date in 2015.

But painful memories linger. Franklin Murray of New York wore a shirt with a photo of his brother, Harry Glen, who worked at Cantor Fitzgerald, one of the companies that lost the most workers.

He said it gave him a “funny feeling” to know there was now a memorial. He has come to the ceremony before but “before it was getting harder, so I forced myself to get down here. Coming down to the area is rough.”

For some, the increasing feel of a return to normalcy in the area threatens to obscure the tragedy that took place there and interfere with their grief.

“Instead of a quiet place of reflection, it’s where kids are running around,” said Nancy Nee, whose firefighter brother, George Cain, was killed in the attacks. “Some people forget this is a cemetery. I would never go to the Holocaust museum and take a selfie.”

But for others, the changes are an important part of the healing process.

“When I first saw (One World Trade Center), it really made my heart sing,” said Debra Burlingame, whose brother Charles Burlingame was piloting the plane before it crashed into the Pentagon. “It does every time I see it because it’s so symbolic of what the country went through.”

The memorial plaza will be closed to the public for most of the day and available only to family members. It will reopen at 6 p.m., at which point thousands of New Yorkers are expected to mark the anniversary at the twin reflecting pools where the towers once stood.

The first ceremony at the site was held six months later and was organized by then-Mayor Michael Bloomberg and his aides. Bloomberg, who took office just three months after the attacks, remained in charge, acting as the master of ceremonies for the next decade. He attended on Thursday, along with Rudy Giuliani who was mayor during the attacks, New Jersey Gov. Chris Christie and New York Gov. Andrew Cuomo.