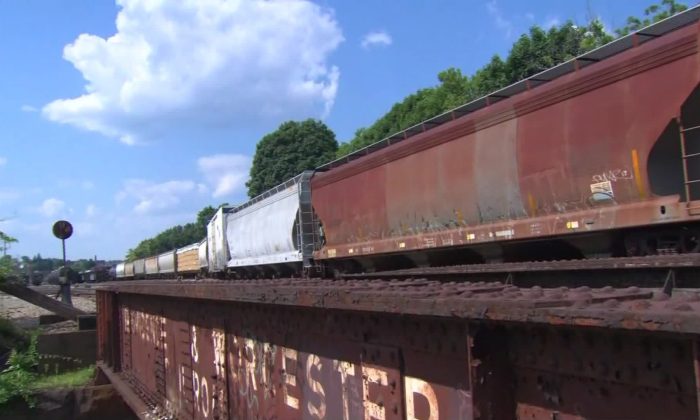 Twin baby boys were found alone on July 3, near a railway in Worcester, Massachusetts. (WBZ via CNN)
US News

Twin baby boys were found near the train tracks by railroad employees in Worcester, Massachusetts, on the morning of July 3, according to multiple reports.

Worcester Police responded to a call at around 12:15 a.m. and were dispatched to an address on Cambridge St. for a welfare check after railway workers found two 9-month-old twin baby boys near the railroad tracks, according to a Worcester Police news release.

A spokesman for Worcester police said the twin boys were found in a stroller, CNN reported, with the spokesman adding that “the intent is under investigation.”

The twin boys were taken to the hospital by paramedics, the Worcester Police news release stated. The twins did not appear to be harmed when the police arrived at the scene.

The Department of Children and Families have identified and taken custody of the boys, and are working with Worcester police to investigate this case, according to NBC 10 Boston.

“It was a total shock to me,” said Carl Wooden, a man who recognized the babies and said that he was with the mother and the twins on July 2, but left at 11 p.m.

“I wish I didn’t, now, knowing the circumstances. She must have passed out or something, and woke up, and—cause she’s not from the area—woke up and didn’t know where she was. But—she knew that she had the kids. I just—I don’t get it,” Wooden said, reported NBC.

“I just think it’s sad. They’re babies,” neighbor Georgeanna Broadard said. “I don’t care what your predicament is. Bring them someplace. Don’t just leave them on the track or wherever she left.”

Worcester Police encouraged people who might have any further information that would help the investigation to contact authorities.

The residents initially thought that the sounds they heard from the secluded area belonged to an animal, and they went off to check, CNN reported. Kayla Ragatz told WSB, an affiliate of CNN, that she went with other residents to investigate with a flashlight.

According to the news outlet, they followed the sound as they went deeper into the woods, eventually leading them to a pile of leaves and sticks, and found a plastic bag with a baby inside. They alerted the authorities right away.

“You don’t anticipate hearing a baby in the woods,” Ron H. Freeman, the sheriff, told the news outlet. “Thank God they went out and investigated.”

Sheriff Freeman’s Press Conference from earlier today regarding the infant that was found. If you have information that could help us locate the family of this baby, call FCSO at 770.781.3087 or anonymous tip line 770.888.7308. #FOCObabyindia https://t.co/6vm25ph7g5

The local Forsyth County hospital who was looking after her eventually named the baby girl “India” instead of calling her Jane Doe.

She received medical attention from the hospital and would be placed in foster care by the Department of Family and Children’s Services.

A newborn baby was found abandoned in a London park, as temperatures approached freezing earlier this year.

The baby girl was found in a shopping bag in the east London park. She was wrapped in a towel and placed on the ground beside a bench next to a playground. A woman and her children out walking their dog heard the baby crying, around 10:15 p.m. on Jan. 31. She immediately called emergency services, The Telegraph reported.

The baby girl was taken to a hospital and was in stable condition as of the morning of Feb. 1. She was connected to an IV and hospital monitoring equipment.

Police are searching for the baby’s mother.

“I urge you to make contact either with police, your local hospital or GP surgery. It is really important that we know that you are safe,” said Inspector Shane Clarke, of the North East Command Unit, via a Metropolitan Police press release. “I would also urge anyone who has information that could help us to reunite this baby with her mother to come forward.”