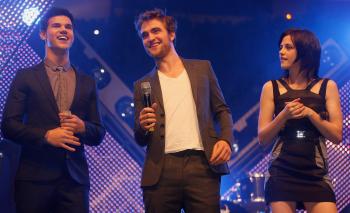 By Ian Ritz
Print
Good news for Twilight fans–the latest installment of the popular film franchise will make its debut this June at the Los Angeles Film Festival. While a specific date has not been announced, "The Twilight Saga: Eclipse” will premier sometime during the June 17-27 run of the L.A. Times-sponsored festival.

Twilight fans waiting patiently for the new film can get a nibble of what is to come from the official trailer which has been posted online. The cast will be preparing for an onslaught of media appearances to help support the already building hype surrounding the movie.

The plot for "Eclipse” centers on Bella (Kristen Stewart. As a series of unexplained deaths unfold around her, Bella is torn between affections for vampire beau Edward (Robert Pattinson) and werewolf fling Jacob (Taylor Lautner) from the previous Twilight film "New Moon." "Eclipse" is set for release on June 30, 2010. Fans can merchandise and check out the trailer at www.eclipsemovie.org.

In other Twilight-related news, the film for the fourth book of the series written by Stephenie Meyer is set to go into production. A statement on www.stepheniemeyer.com said that Bill Condon will be directing the film. Condon is known for his work in 1998’s Academy Award winning "Gods and Monsters" along with 2002’s "Chicago" starring Tibet-supporter Richard Gere.